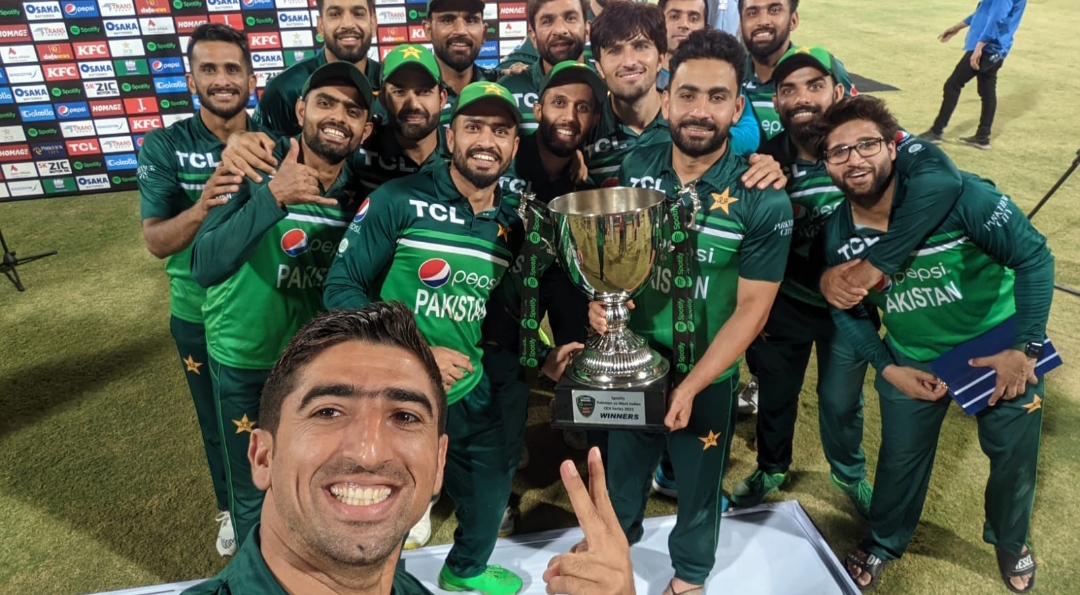 Multan, 12 June 2022: Pakistan’s lower middle-order batting emerged successful from a stern test to help the home side win the third One-Day International by 53 runs on the Duckworth-Lewis-Stern Method and sweep the ICC Men’s Cricket World Cup Super League series against the West Indies by 3-0 here on Sunday.

In front of another packed to capacity crowd on a day that saw play halt for approximately an hour due to a dust storm, which reduced the match to 48 overs a side, Pakistan slipped from 85 for no loss in the 17th over to a precarious 117 for five in the 25th over before recovering to post a commanding 269 for nine.

The bowlers then overcame the West Indies’ counterattack to dismiss the visitors for 216 in 37.2 overs. Akeal Hosein fought a lone battle, hitting two fours and six sixes in a 37-ball 60, while Keacy Carty scored 33 and Shai Hope and Keemo Paul contributed 21 runs apiece.

The West Indies entertained a holiday crowd with 15 fours and 10 sixes after Pakistan had struck 20 fours and four sixes.

Shadab Khan followed up his match-winning 86 with figures of four for 62, Hasan Ali took two for 29, while Mohammad Nawaz, who took four for 19 on Friday, bagged two for 56. Like Shadab, Nawaz was also returning to ODI cricket after recovering from an injury.

Mohammad Haris, who had earlier earned a second-ball duck, kept wickets and accounted for three batters. Similarly, Shahnawaz Dahani, who became the 235th cricketer to represent Pakistan in ODIs, picked up a wicket in his second over to finish with figures of 6-0-36-1.

The star of the match was all-rounder Shadab, who was playing his first complete ODI series since July 2021 and had been under fire for being ineffective and inconsistent since the ICC Men’s Cricket World Cup 2019.

The 23-year-old pulled Pakistan out of a deep hole with a gutsy and courageous career-best 86 off 78 that included four fours and three sixes. Together with Khushdil Shah (34), Shadab added 84 runs for the sixth wicket and then another 40 for the eighth wicket with Mohammad Wasim.

It was Shadab’s measured and well-constructed innings that helped Pakistan to collect 78 runs from the last 10 overs to reach 269 for nine, which looked highly unlikely after the middle-order had collapsed like a house of cards against Nicholas Pooran, who before this match, had only bowled three deliveries in international cricket.

Pooran returned figures of 10-0-48-4, but more importantly broke the back of Pakistan’s middle-order at a time when they were ready to shift gears after Fakhar Zaman (35) and Imam-ul-Haq (62) had provided Pakistan an 85-run first wicket stand.

Pooran picked up four of the five top-order batters, dismissing Fakhar, Imam, Mohammad Haris (0) and Mohammad Rizwan (11). Babar Azam, who suffered a rare failure when he scored just one, was trapped in front of the wickets by Hayden Walsh.

Nevertheless, Shadab held the innings together and in partnership with Khushdil, rebuilt the innings on a wicket that had no demons. Shadab waited patiently for the lose deliveries but when they came his way, they were severely punished as he continued to nudge and push the ball around to keep the scoreboard moving.

He was eventually out on the first ball of the last over as he attempted a ‘Dilscoop’ to find his middle stump disturbed.

Pakistan have strengthened their fourth position in the Super League with 90 points in 15 ODIs of five series and have three series (9 ODIs) remaining. They will play the Netherlands in August and New Zealand in January, while time of the Afghanistan series is yet to be decided. Seven of the 13 sides in the Super League plus hosts India will qualify directly for the ICC Men’s Cricket World Cup 2023.

Player of the series – Imam-ul-Haq (Pakistan)