Jamaica, 24 August 2021: A Career best performance from Shaheen Afridi and a rapid innings with the bat from Pakistan has set up what looks likely to be an enthralling final day to the series.

Bowled out for 150 shortly after lunch on day four, West Indies finished the day at 49/1 in their second innings, chasing 329 to win. Going into the final day’s play, both teams will believe they can win the match from here.

Afridi was the star of the day, taking 6/51 before Pakistan’s batters freed their arms.

Needing to force a result to level the series, Pakistan approached their second innings like it was an ODI, racing to 176/6 in just 27.2 overs before declaring.

Earlier, West Indies started the day in trouble at 39/3 and their situation looked set to deteriorate quickly when Afridi drew an edge from nightwatchman Alzarri Joseph (4) that was pouched impressively by Babar Azam low to his left at third slip. Joseph was the third batter out to Afridi for the innings, with the gun quick accounting for both openers on day three.

The situation improved for West Indies as Nkrumah Bonner (37) and Jermaine Blackwood (33) put on a steady 60-run stand to take them past 100. Unfortunately for Kraigg Brathwaite’s side, the duo’s hard work came undone across two overs.

Bonner was the first of the pair out, edging a cunning bit of bowling from Mohammad Abbas (3/44) behind, with the wily seamer getting a ball on off-stump to straighten just enough. Abbas struck again on his very next ball, nicking off Kyle Mayers for a golden duck.

It was officially a collapse when Afridi bounced out Blackwood with a ball that ballooned off the outside shoulder of the bat to be taken by Fawad Alam – the star of day three diving back and to his right to take a good catch at gully. From 105/4, West Indies had slipped to 109/7.

Abbas chimed in again to trap Joshua Da Silva in front for six before Afridi wrapped up a six-wicket haul with the dismissals of Jason Holder (26) and Kemar Roach (8) to end West Indies’ innings early in the second session, giving Pakistan a lead of 152.

Having lost the first Test, Pakistan adopted a cavalier approach in their second innings. By the time Abid Ali (29) fell to Joseph (2/24) in the 10th over, they had already added 70 to their score. Imran Butt (37), Azhar Ali (22) and Azam (33) all managed contributions at strike rates of better than 70, with the promoted Hasan Ali hitting two sixes on his way to 17 off 11. Hasan and Abid were among four Pakistani batters to score at better than a run a ball as Azam declared 10 overs into the evening session.

West Indies finished the day with nine wickets in hand, needing another 280 runs to win. They enjoyed a solid start to their innings as Brathwaite and Kieran Powell added 34 runs for the first wicket before the latter was run out by a direct hit from Afridi from the boundary’s edge. Powell paid the price for not sliding his bat, run out at the striker’s end by what looked like an innocuous throw. 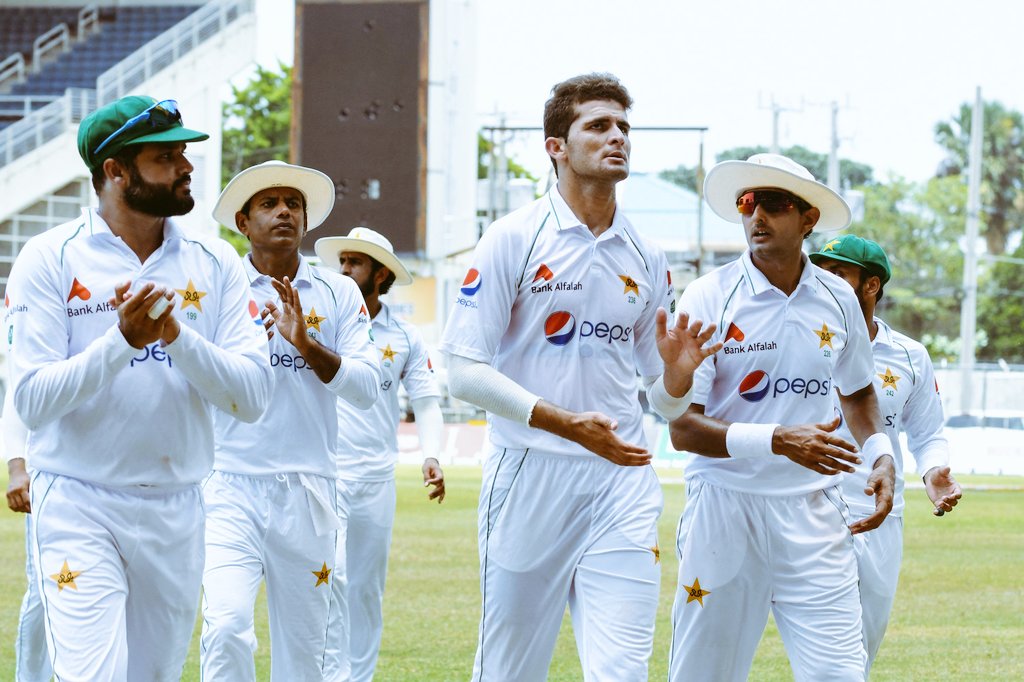