Duabi, 11 August 2021: West Indies captain Stafanie Taylor and Bangladesh all-rounder Shakib Al Hassan have been voted as the winners of the ICC Player of the Month Awards for July 2021.

All-rounder and captain of the West Indies women squad Stafanie Taylor was deservingly voted the ICC Women’s Player of the Month for July 2021. Taylor contributed with both bat and ball as she led her team to win the ODI and T20I series against Pakistan in July. In the four ODIs against Pakistan, Stafanie scored 175 runs with a strike rate of 79.18 and took three wickets with an economy rate of 3.72. Stafanie was also on top of the rankings for batters and allrounders in the ICC Women’s ODI Rankings earlier in July.

Commenting on her recognition, Stafanie said: “This is a bit surprising to me, winning ICC Player of the Month award for July, but I’m happy. It shows that the hard work you put in, will pay off and it did, against Pakistan, to help us win that series. We played well in both formats.

“I’m over in England now playing in The Hundred, which is a different kind of competition, played at a faster pace, but I’m still working hard. We’re also looking forward to the series against South Africa at home, and we will be looking to win that as well. I want to thank the fans for all their support, as it is always appreciated.”

From the Bangladesh camp, experienced all-rounder Shakib Al Hasan was deservingly named the ICC Men’s Player of the Month for July 2021 for his stellar performance across all three formats of the game.

Shakib’s contributions to all three formats of the game helped Bangladesh win the series against Zimbabwe last month. He scored 96 unbeaten runs as Bangladesh defeated Zimbabwe by three wickets in the second ODI at the Harare Sports Club. In the T20Is with the ball, Hasan took three wickets at an economy rate of seven leading his country to a series win against Zimbabwe. He is also the top Men’s all-rounder in the ICC Men’s T20 Rankings announced earlier today.

Reacting to his award Shakib Al Hasan said: “It is very humbling to be voted ICC Men’s Player of the Month for July 2021. There have been many outstanding performances during the month and that is why this is special for me.

“I find most pleasure and satisfaction when I contribute to wins and therefore, I am very happy to have helped in Bangladesh’s successes over the last few weeks.” 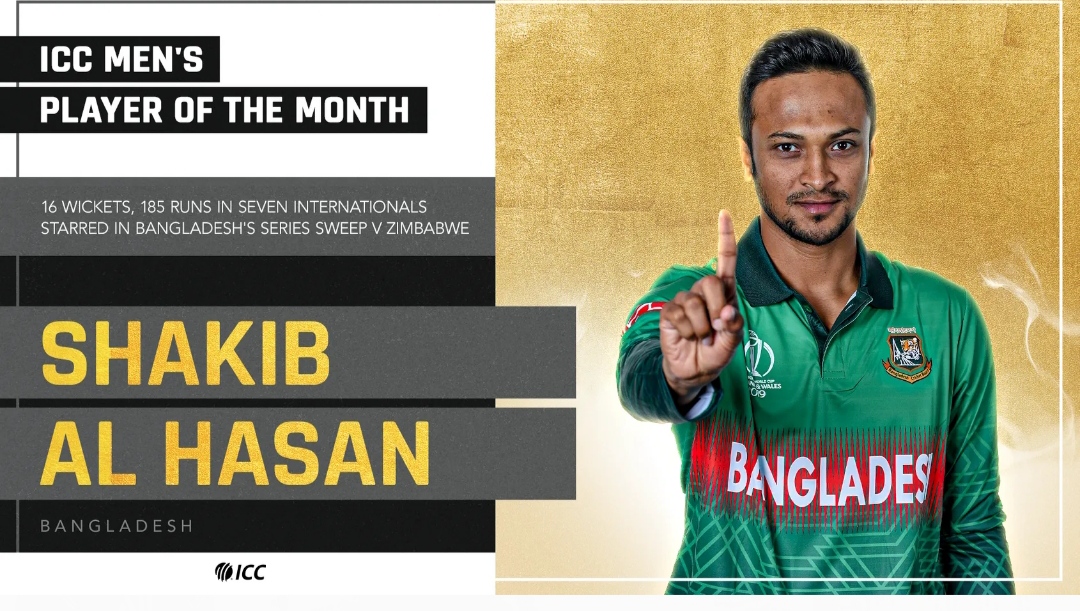