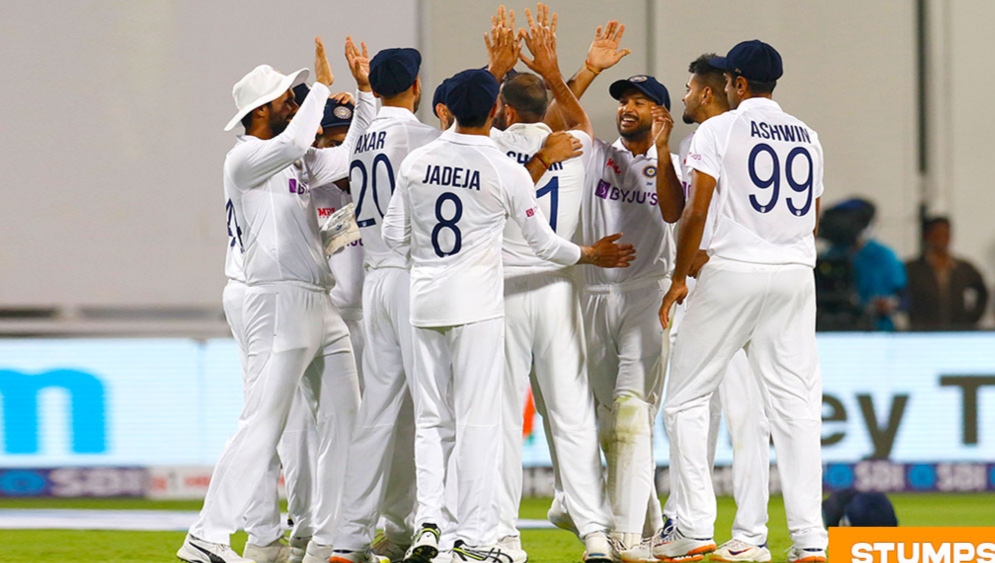 Bangalore, March 13: Sixteen wickets fell on an extraordinary opening day in Bangalore as India took control of the Second Test against Sri Lanka.

Shreyas Iyer top-scored with an attacking 92 as India raced to 252 all-out inside the first two sessions of the day-night match.

And India’s quick bowlers did the damage with the ball, tearing through the Sri Lankan top order as Jasprit Bumrah took 3/15 and Mohammad Shami 2/18.

India lost both openers early on day one, with Mayank Agarwal run out in unusual circumstances, with an appeal initially taken for an lbw. And Rohit Sharma followed his opening partner back to the hutch inside the first ten overs, edging the dangerous Lasith Embuldeniya to slip to become the first of eight wickets to fall to spin in the innings.

Hanuma Vihari and Virat Kohli stabilised things for a while during the morning session with a 102-ball partnership of 47 that turned out to be comfortably the longest any pair were able to stay at the crease all day.

But both fell in the space of seven balls before lunch, Vihari edging Praveen Jayawickrama behind for 31 and a flabbergasted Kohli trapped lbw by a shooter from Dhananjaya de Silva for 23.

With Sri Lanka’s spinners looking extremely dangerous, Rishabh Pant went on the counter-attack either side of lunch in a remarkable yet characteristic knock, hitting seven boundaries off his 26 deliveries faced in a quickfire 39.

Pant had helped India beyond triple figures when he had his stumps scattered by a turner from Embuldeniya, but Iyer kept the momentum going as wickets continued to fall around him.

Ravichandran Ashwin was the only remaining India batter to make it to double figures, facing 33 balls in his gutsy 13, but Iyer’s brilliance at the other end saw his side add a further 69 runs after Ashwin had departed.

And Iyer was the last wicket to fall, stumped by Niroshan Dickwella as he went for one of two boundaries required to reach his century, dismissed with what turned out to be the final ball of the second session.

Embuldeniya and Jayawickrama finished with three-wickets apiece, with the tidy Suranga Lakmal taking the only wicket to fall to thequicks, ending with economical figures of 1/12 from eight overs.

India’s seamers were always likely to be a threat under the lights in the final session, but few could have predicted such a destructive performance from Bumrah and Shami on a pitch that appeared better suited to spin than pace.

Bumrah struck right at the start of his second over, drawing an edge from Kusal Mendis that was snaffled by Iyer in the slips. And the pair combined for another wicket off the first ball of Bumrah’s third over, Lahiru Thirimanne caught by Iyer in the cordon.

The early impact of pace saw Rohit Sharma replace Ashwin with Shami in the new-ball attack, and the move reaped immediate rewards, with Dimuth Karunaratne clean-bowled to leave Sri Lanka 14/3, with all three wickets having been taken by the first ball of an over.

Angelo Mathews and De Silva attempted to stem the tide, but their resistance didn’t last long, with the latter trapped lbw by Shami for 10.

And the wickets kept on falling, with spin taking its first scalp of the innings when Axar Patel had a nervy Charith Asalanka caught at mid-off.

Sri Lanka’s hopes of emerging from the wreckage of their first innings with a minor deficit suffered a huge blow shortly before the close.

Mathews had been the only batter to establish himself at the crease, showing excellent determination to eke out 43 runs before falling victim to a slower-ball from Bumrah that caught him off-guard, with Sharma holding onto the edge at slip.

And the match will already be well along its path when Sri Lanka resume at 86/6 on the second morning, still trailing by 166 runs.