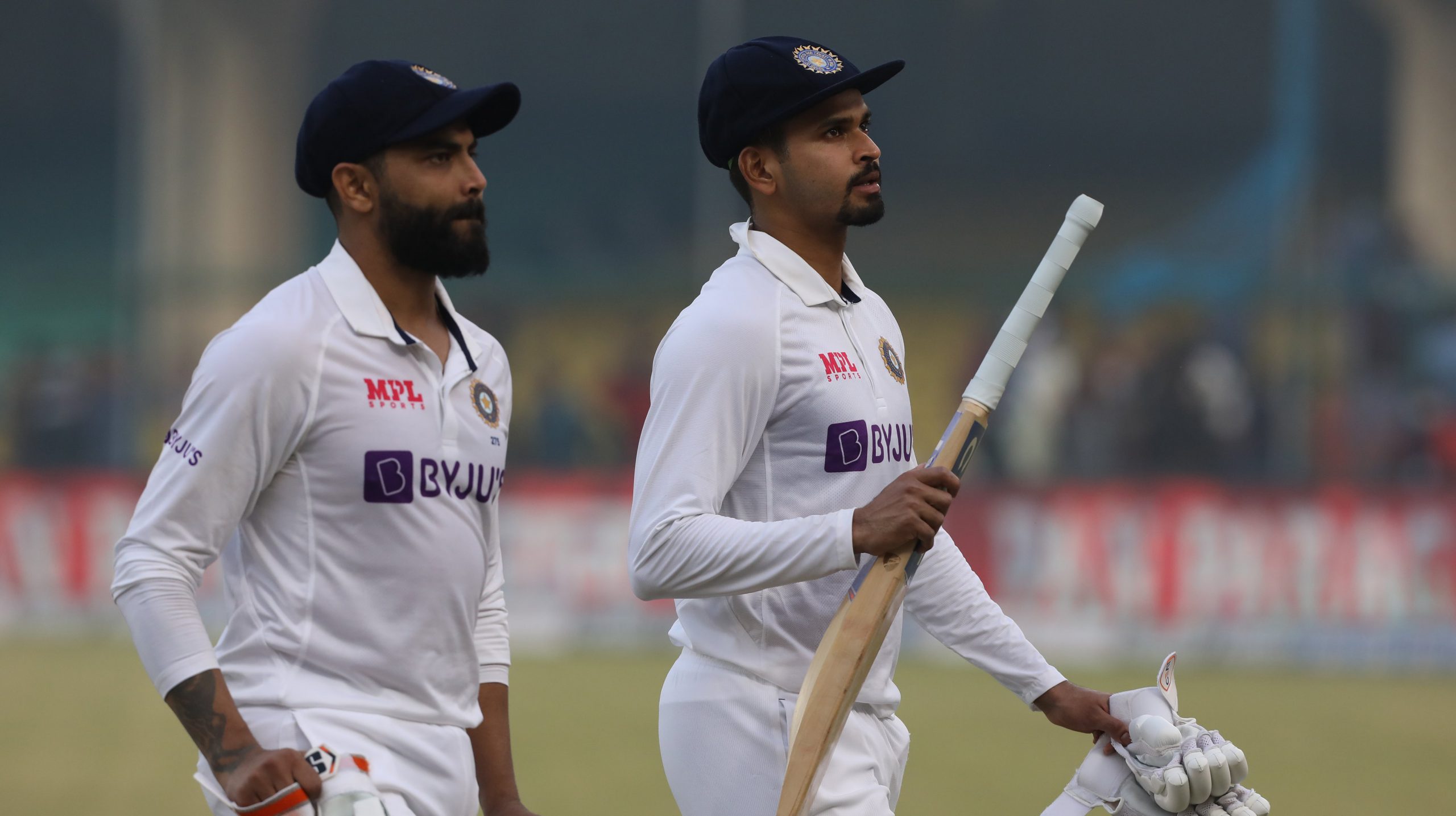 Kanpur, November 25: Shreyas Iyer, on Test debut, strung together an unbeaten partnership of 113 runs with Ravindra Jadeja to put India in a commanding position at stumps on day one in Kanpur.

India and New Zealand went into the game with a similar team composition, opting to go with three spinners and two pacers on a wicket expected to assist spin.

Asked to bowl first by India, New Zealand made full use of the conditions to extract movement with the new ball. Kyle Jamieson drew first blood for the Black Caps, dismissing Mayank Agarwal in the eighth over. Bowling in the corridor of uncertainty, Jamieson forced Agarwal to play and induced a thin edge into the gloves of Tom Blundell.

Shubman Gill and Cheteshwar Pujara took their time in the middle before the former decided to take the attack to the bowlers. Gill targetted Ajaz Patel, hitting his first boundary of the innings in the 11th over before smashing the left-arm spinner for a six and a four in the same over.

Gill soon brought up the fourth half-century of his Test career. At the other end, Pujara was solid as ever, tiring the bowlers out in hot and sultry conditions in Kanpur.

The break proved to be just what New Zealand needed as they struck in the very first over after lunch. Gill failed to negotiate a brilliant ball moving into him, leaving a massive gap between bat and pad as Jamieson hit timber to claim his second wicket of the day.

Captain Ajinkya Rahane and vice-captain Pujara looked solid in the middle, putting away the bad balls for boundaries to take India past the 100-run mark.

The change of bowling by Kane Williamson proved to be a masterstroke as Tim Southee broke the 24-run stand, inducing an outside edge off Pujara’s bat with a wonderful away seam.

The wicket brought debutant Shreyas Iyer to the crease, who was jittery at the beginning but motored through the period. Just when Rahane was starting to look confident and was stroking the ball with impeccable timing, Jamieson broke through, forcing the Indian captain to play on to his stumps, just a ball after Rahane had a caught behind rightfully overturned by DRS.

At 145/4, India were in a slight spot of bother. Ravindra Jadeja and Iyer had to see off a tricky period of seven overs to ensure they don’t lose any more wickets in the second session of the day.

India came out after the break with intent, scoring regular boundaries to put the pressure back on New Zealand. Iyer, in particular, took a liking to spinner operating from both ends as he struck four boundaries in the first eight overs after tea and brought up his maiden Test fifty on his debut, becoming the 30th Indian man to achieve this feat.

The two batters rendered the whole Kiwi bowling ineffective with the old ball, with both seamers and spinners looking helpless in difficult overhead conditions. India continued to accumulate runs as the Black Caps waited for the new ball to be available.

The new ball didn’t really cause too much problem to the set Indian batters. Ravindra Jadeja brought up the 100-run partnership with Iyer with a four off the hips and soon got to his 17th Test fifty as well.