﻿ Small town boys in big arcades: How these Jammu & Kashmir players made it to the IPL - Kashmir Sports Watch
HomeFeatureKSW Special

Small town boys in big arcades: How these Jammu & Kashmir players made it to the IPL

The India Premier League (IPL) has become the breeding ground for Indian cricketers. Over the years, many players have risen from IPL ranks and progressed to play for India – Rishabh Pant, Jasprit Bumrah, Hardik Pandya are a few prominent examples. The seasoned all-format-batsmen too have carved a niche for themselves – Virat Kohli, Rohit Sharma have been the top players of the IPL, for instance.

Being the most-watched T20 tournament and the second-best paying sporting league globally, the IPL has become a dream format for players to play in. In this extreme fight to find a spot in the cash-rich league, Abdul Samad, Parvez Rasool and Rasikh Salam are the three names with a history of their own. These Jammu & Kashmir cricketers had to take an unforseen route to hit the floors of IPL. Let’s take a look how they progressed from Kashmir to IPL:

Mentored by Irfan Pathan, a fiery batsman who can also bowl quickish leg-spin, Samad was one of the emerging stars of the 2020 India Premier League. Befor entering the mega league, the right-handed batsman had an unreal domestic season.

Nobody could strike more sixes than his 36 for Jammu and Kashmir in the Rajni Trophy and in all, he amassed 592 runs in 17 innings at an astonishing strike rate of 113.

The Jammu-born was the fourth player from J&K to get auctioned in IPL after Manzoor Dar, Rasikh Salam and Parvez Rasool, when Sunrisers picked him up for his base price of INR 20 lakh for IPL 2020.

Mewada and Pathan had spotted Samad in 2018 when he was just 16 during a trial in Jammu. His driving on the up against quicks bowling from 18 yards had Pathan digging up Samad’s scores in district cricket.

“He was effortlessly hitting the ball,” Pathan remarked during IPL 2020. “ But when I looked through his numbers, he didn’t have a 50-plus score. I took him aside and told him he would be put in the probables, but he needed to work on preserving his wicket. It’s not about six-hitting.”

Following Pathan’s advice, Samad displayed signs of building innings during the Ranji Trophy. When J&K were reduced to 131 for 4 in their second innings against Maharashtra on a green track in Pune, he absorbed the pressure and averted a collapse, scoring 78 off 89 balls. His contribution was central to J&K stretching their lead to 363 and eventually winning the game.

The all-rounder also stepped up against a quality Karnataka attack, making 43 off 50 balls in the Ranji quarter-final at home, but J&K narrowly fell short of the first-innings lead and eventually lost the game.

In a slightly iffy Sunrisers middle order, he played a dual role of building an innings as well as finishing, depending on the conditions in his debut IPL season, last year.

Rasool was the first player from Jammu and Kashmir to play in IPL. Parvez, in 2012-13 Ranji Trophy, scored 549 runs in seven matches at an average of 54. He remarkably also took 33 wickets along with three hat-tricks. This extraordinary performance led to his addition to India A team.

Rasool caught the eye during the 2014 Ranji Trophy again, making astonishing 663 runs, which included two centuries and three fifties with an average of 51. He also scalped 27 wickets with two five wickets hauls in nine matches.

J&K was able to move up to the quarter-finals for the first time since 2000, only because of Rasool’s impressive display during that season.

On the back of these tournaments, Rasool became the first Jammu & Kashmir cricketer to get into the Indian Premier League after being signed by now-defunct Pune Warriors India in 2013. In 2014, he was bought by Sunrisers Hyderabad for 95 lakhs in the auction. He then played a few seasons for different franchises before being left out.

Rasikh was also mentored by former Indian cricketer Irfan Pathan, who saw the spark in the young pacer and spent a lot of time in developing his skills. Rasikh made his first-class debut in J&K on 30th December 2018 while playing against Assam.

He first caught Pathan’s eye in a talent hunt. Hired by Jammu and Kashmir Cricket Association (JKCA) in 2018 to improve cricket in J&K, which had been in gloom due to recurring mismanagement of funds and poor infrastructure. Pathan chose Rasikh from 700 aspiring cricketers in the nets despite he having no prior experience due to resistance from selectors.

After 2018, the youngster played in all major domestic tournaments. From the state under-19 team to the Mushtaq Ali tournament, he didn’t just take wickets but continued to improve. When Dar was called for the Vijay Hazare Trophy, the 18-year-old caught the eyes of the Mumbai Indian scouts with his ability to swing the ball both ways.

Rasikh was then picked by Mumbai Indians for 20 Lakh rupees in IPL 2019 Auction. The 18-year-old, surprisingly, played the very first match of the season for Mumbai against Delhi Capitals.

He bowled impressive 3 overs before going for some runs in his last over. “Rasikh swung the ball in the nets, that is why the boys wanted to play him. He got hit for a six and four in the last two balls. Other than that, he bowled well.” emarked Yuvraj Singh, the veteran Indian cricketer.

“I think he did fantastic for his first match in terms of handling pressure. Pretty much like an international game. I feel he is going to be special in the next two three years.” He added.

Although he wasn’t given any further matches in the tournament, Mumbai had spotted a spark in him. However, Rasikh was, after the conclusion of IPL 2019, banned for two years by BCCI after found guilty of age-fudging. His ban will expire in June this year.

Apart from these three, Manzoor Dar, popularly known as Pandav, was also picked by Kings XI Punjab in IPL 2018, however, he didn’t get to play any game.

Meanwhile, although there’s of course a long way to go for Jammu and Kashmir cricketers, these players have come further than what most could imagine to make a mark in cricket.

Kashmir has had very little share in India’s glorious cricketing history. They’ve had very few occasions where they’ve celebrated the success of their cricketers – Parvez Rasool being the only to play international cricket.

The lack of representation of the state in cricket is not due to lack of knowledge or some other reason, but, because of the lack of infrastructure and inconsistent training modules.

“When I played in IPL or Indian team, the facilities in Jammu and Kashmir were not up to the mark as compared to the other states. We didn’t have even 10 percent of those facilities” Rasool remarked on the scenario of the training facilities last November.

This tell us what it means to be from a poor cricketing state like Jammu and Kashmir and making it to the extravaganza that the IPL has emerged as over the years. 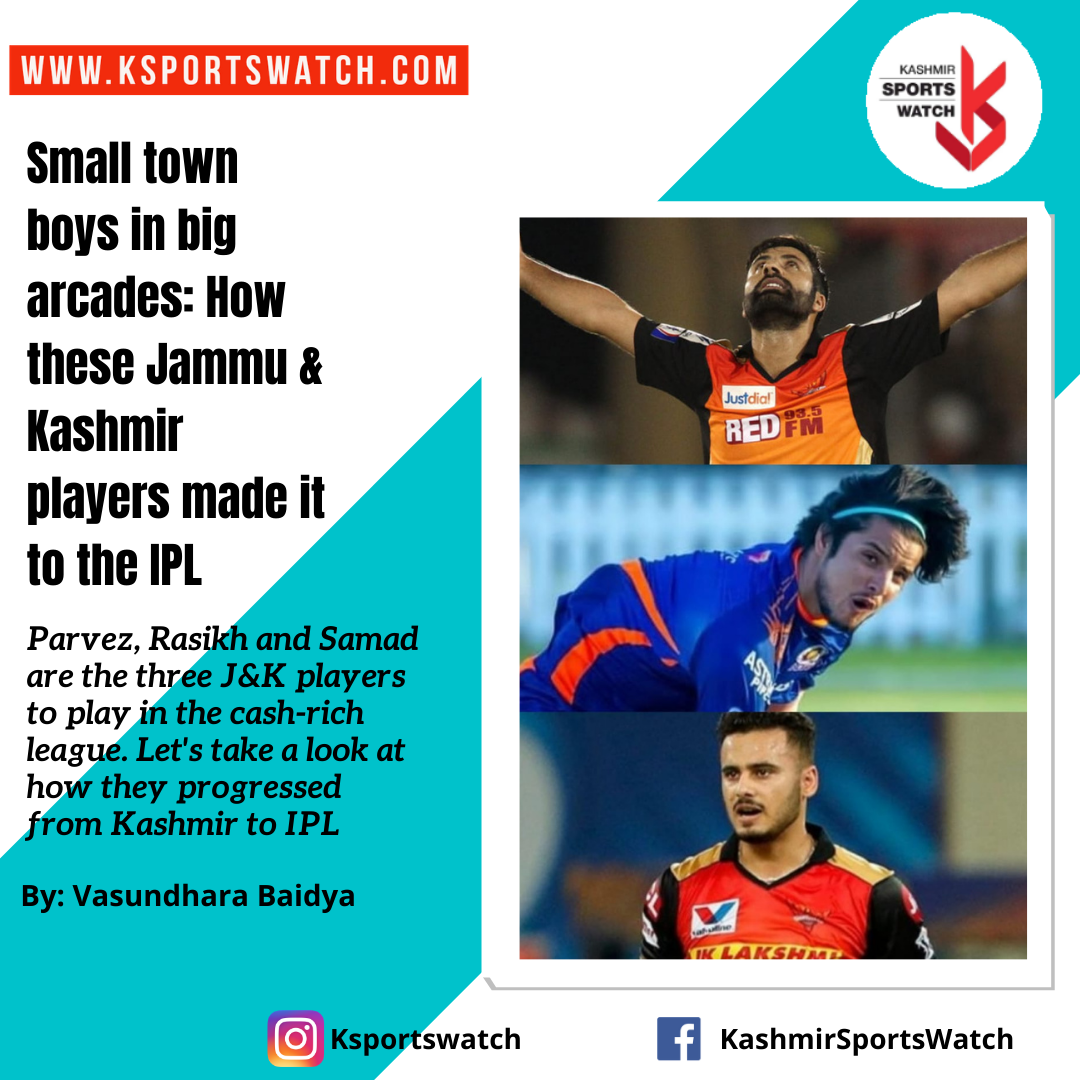