DHAKA: Australia captain Steve Smith said on Saturday his team’s experience in India earlier this year will help overcome the challenge of Bangladesh in the forthcoming two-Test series.

“I think Bangladesh have played some very good cricket and they won a Test match here not very long ago. So we are seeing it as a big challenge,” Smith said in his first press conference in Dhaka since arriving here late on Friday amid tight security.

“Hopefully we can learn a lot from what we did in India and bring them into the game here and show some improvements,” he said. 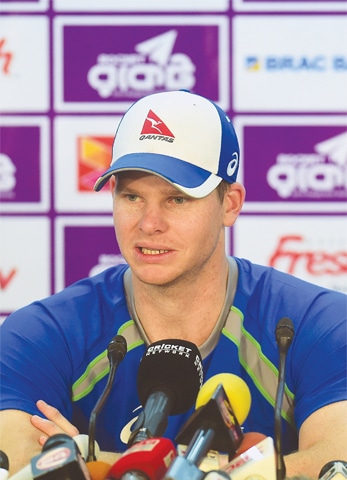 Australia visited India from February to March for four Test matches and despite a 2-1 loss in the series Smith’s men were praised for putting up a good performance.

Smith led his side from the front scoring three centuries to become the highest run-getter in the series with 499 runs at an average of 71.28.

Smith is now leading Australia for their first bilateral Test series in Bangladesh in 11 years.

Australia’s last visit to Dhaka was with Ricky Ponting’s team in 2006, six years after the hosts were granted Test status.

Bangladesh have emerged from that 2-0 series defeat as a decent side, winning their last Test at home and away, respectively against England and Sri Lanka.

Smith said conditions would be the biggest challenge for them in the two Test matches.

“The conditions are always quite foreign to us when we come to the subcontinent. The wickets are always different than what we are used to back home. It’s definitely going to be a big challenge for us,” he said.

The visitors are scheduled to play a warm-up match on Aug 22 and 23 before they take on Bangladesh in the first Test at Sher-e-Bangla National Cricket Stadium in Dhaka from next Sunday (Aug 27).

The tourists arrived in Dhaka for their first Test tour of Bangladesh in more than a decade, officials said.

“Since the team landed it was given the security as we’ve promised. We are confident everything will go according to our plan,” he said.

Police said some 300 members of elite police units were on guard as the Australians landed at Dhaka’s Hazrat Shahjahal International Airport.

“We’ve adequate security arrangements at the airport. We’ve even cleared the road [leading to the team’s hotel],” Inspector Moslem Uddin of the Armed Police Battalion said.

Australia were due to play two Tests in Bangladesh in October 2015 but the tour was cancelled amid security fears after a wave of attacks by Islamist extremists in the Muslim-majority nation.

Australia refused to send their team to last year’s Under-19 World Cup in Dhaka over security worries.

Cricket Australia agreed to reschedule the series this year only after Bangladesh promised head-of-state style security for the Baggy Greens.

CA’s security manager Sean Carroll visited Bangladesh at least three times over the past 12 months to see the security measures before the Australian authorities confirmed the series.

Carroll, who is part of the 32-member Australian party, arrived in Dhaka early to ensure everything was in order for the two Test tour.

The second Test will be played at the Zahur Ahmed Chowdhury Stadium in Chittagong from Sept 4.

The Aussies will leave Bangladesh on Sept 9 after the end of two-match Test series.