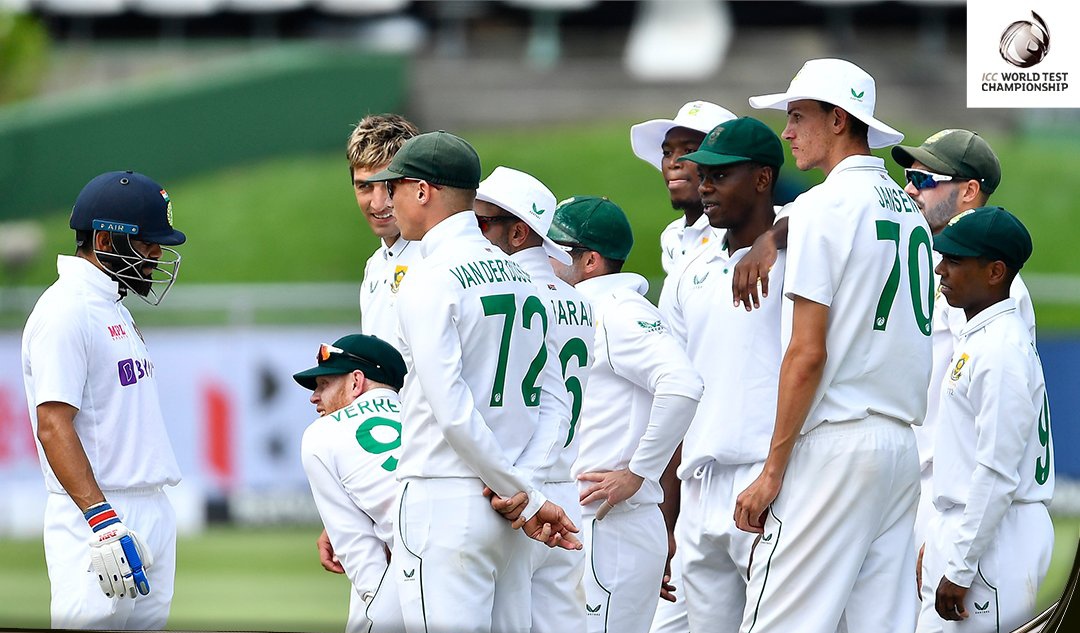 Capt Town, January 11: Virat Kohli’s fighting knock of 79 helped India post 223 on day one of the third Test against South Africa , even as Kagiso Rabada’s excellent 4/73 pegged the visitors back.

Kohli led the fightback for India with a gritty 79 after the other batters fell prey to the South African bowling after India opted to bat.

KL Rahul and Mayank Agarwal, the openers, made a watchful start in tricky conditions. They showed immense patience and went through the first 45 minutes of the morning session unscathed, putting on a stand of 31 runs in 11 overs.

But Duanne Olivier struck on the second delivery of the 12th over to send Rahul back for 12. Agarwal (15) didn’t last long either as he nicked out to Aiden Markram in the slips off Kagiso Rabada’s bowling in the very next over.

India were reduced to 33/2 in the space of an over, and the onus was now on the experienced duo of Cheteshwar Pujara and Kohli. They steadied the ship with a partnership of 62 runs, with Pujara doing the bulk of the scoring. But they couldn’t extend it much longer after lunch as Marco Jansen produced a beauty of a delivery to have Pujara caught behind for 43.

Ajinkya Rahane followed soon after, for an individual contribution of nine runs, and India found themselves in trouble once again, with the scoreboard reading 116/4.

Rishabh Pant tried his best to hang around along with the skipper after the loss of those early wickets. He was involved in another vital partnership of 51 runs with Kohli, but he gave in to his aggressive instincts once again as he was caught at gully trying to guide a short delivery to the boundary. Pant contributed 27 runs to that partnership, and the job was now on Kohli and the Indian tail to lead the side to a respectable total.

Kohli kept playing some delightful shots, having exercised immense caution early on. He brought up his fifty, and was looking determined to bring about his 71st international century, a wait that has endured since November 2019. Unfortunately, he couldn’t find much support from the other end.

R Ashwin (2) and Shardul Thakur (12) lost their wickets in quick succession after Pant’s dismissal, although Thakur did add 30 runs for the seventh wicket in quick time. Jasprit Bumrah was out for a duck not long thereafter too, and Kohli decided to accelerate.

However, that brought up his downfall. He was dismissed caught behind for 79, Rabada claiming the prized wicket. The pacer was involved in an intense duel with the Indian skipper throughout the day, and the joy he gained from that scalp was there to be seen.

India were ultimately bowled out for 223, leaving South Africa with a tricky few overs to negotiate before stumps. They had to see off eight overs, as it turned out, and that was enough for Jasprit Bumrah to claim a vital wicket.

He dismissed the Proteas skipper Dean Elgar (3) in the fifth over of their innings, the left-hander nicking it to Pujara’s safe hands in the slips.

South Africa sent in Keshav Maharaj as Nightwatchman, and he managed to survive the few remaining overs alongside Aiden Markram to set up an intriguing second day.