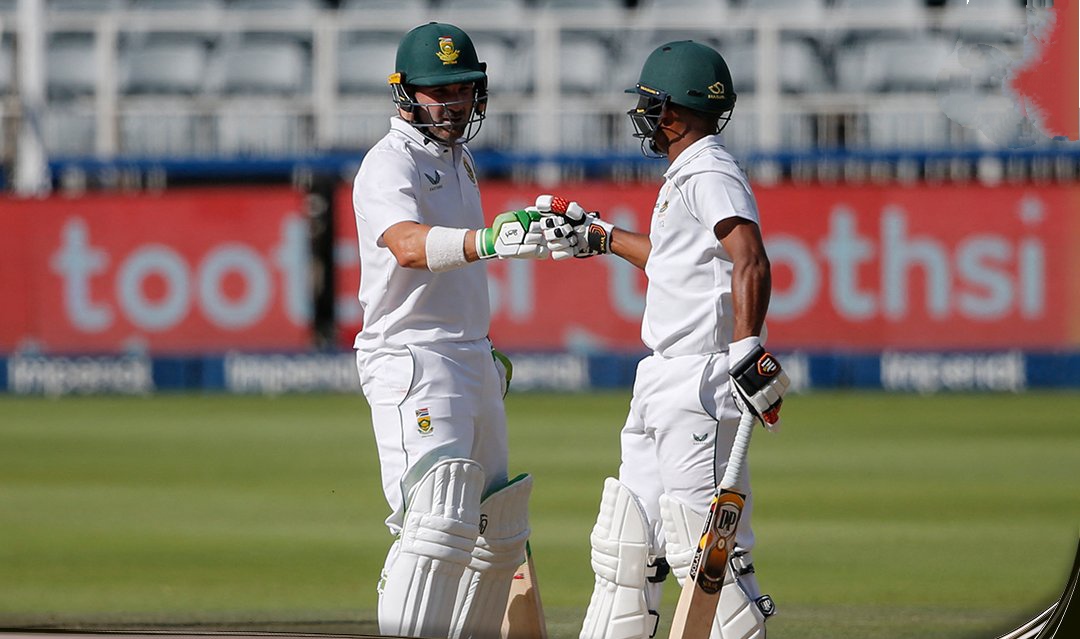 Johannesburg, January 6: Set a target of 240 by India, gutsy innings from the South African top order has left them 122 runs away from a series-levelling win in Johannesburg.

A gutsy innings of 46* from captain Dean Elgar has kept South Africa in the hunt going into the fourth day. Needing 240 to win and draw the series, the Proteas went to stumps on 118/2.

Earlier in the day, India started at 85/2, Cheteshwar Pujara and Ajinkya Rahane continued to show positive intent that helped India put on a sizeable lead the previous day. Pujara was confident in his front foot play and punished the bad balls for boundaries.

Rahane too wasn’t to be left far behind as he too kept the scoreboard ticking, even smashing a six off Marco Jansen’s bowling. Both Pujara and Rahane got their respective half-centuries in quick succession but failed to convert it to a big one.

Kagiso Rabada was the wrecker in chief for South Africa, helping the host gain a foothold in the game. He first dismissed Ajinkya Rahane, inducing a faint outside edge with the ball that moved away. Rabada then trapped Pujara in front of the stumps in the next over to bring in two new batters to the crease.

Rishabh Pant didn’t trouble the scorers, as he fell trying to play a wild swat over cover, only to edge it into the gloves of the keeper. Ashwin showed some intent but was strangled down the legside trying to flick it behind.

Shardul Thakur did not bother holding back after lunch and took the attack to the bowlers. He took a liking to the left-arm pace of Jansen, smashing him for four boundaries and a six after the break en route an entertaining 24-ball 28. However, it was Jansen who had the last laugh after Thakur holed out in the deep trying to clear the ropes.

Jansen then dismissed Shami for a duck and was involved in a heated battle with Jasprit Bumrah. Bumrah was tested with short deliveries, copping multiple body blows off the bowling of Jansen. Bumrah did connect a maximum off the bowling off Ngidi but was undone by the short one in his next over.

Vihari added 21 crucial runs for the final wicket with Mohammed Siraj, with the former doing all of the scoring. The resistance did not last long though, as Ngidi cleaned up Siraj. India were all out for 266, setting South Africa a target of 240 to win.

South Africa had seven over to bat before tea and instead of going into a shell, the openers made good use of the new, hard ball, knocking off 34 of the target in the short period.

India finally got a breakthrough after the break, with Thakur trapping Aiden Markram leg before wicket to break the opening stand three runs short of a fifty.

Keegan Petersen arrived at the crease and once again gave everyone a glimpse of why he has been rated highly. He looked at ease in the crease, dispatching the bad balls to the boundary as South Africa started to slowly inch closer towards the target of 240.

At the other end, Elgar, though far from his fluent best, weathered the storm to keep Petersen company.

With pacers tiring out and not offering much, KL Rahul brought Ravichandran Ashwin on and it paid dividends. Bowling his fourth over, Ashwin extracted considerable spin to beat the bat of Petersen, who was struck on the pads missing the flick.

Elgar and Rassie van der Dussen ensured there were no more casualties in the day, taking South Africa safely to stumps at 118/2, still 122 runs away from a win.