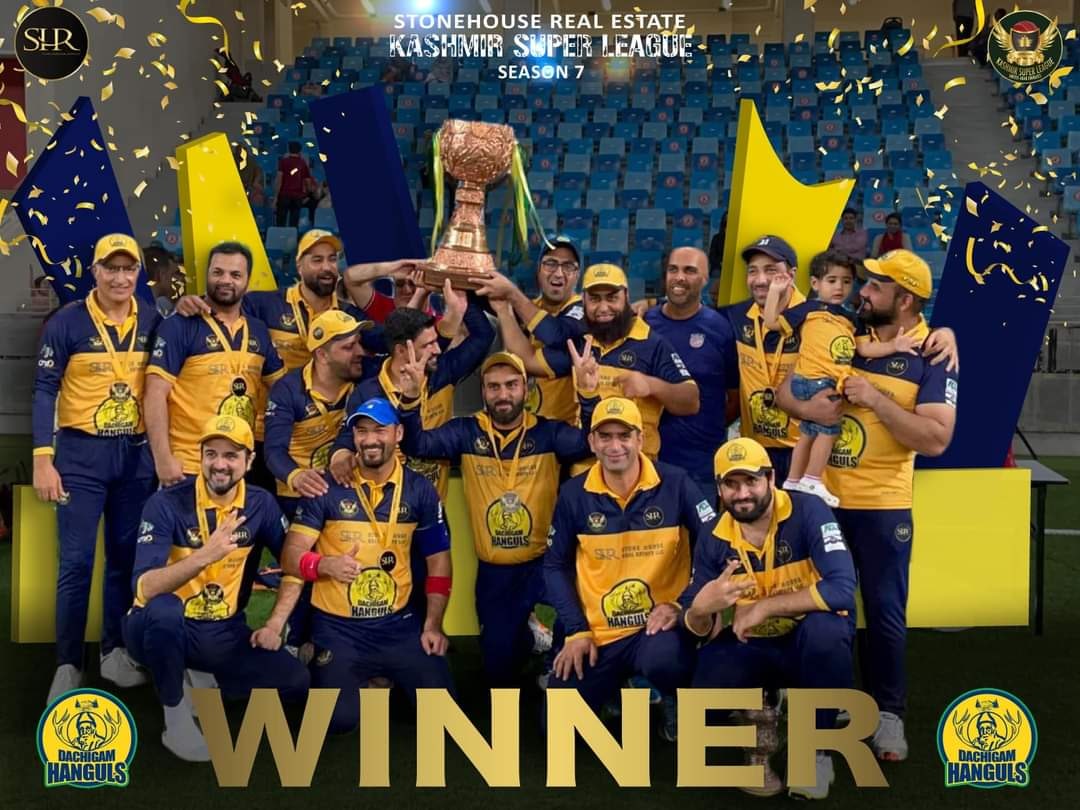 Dubai, March 9: Cricket is a way of life, it teaches us teamwork, leadership and discipline. Well, that is what I have I learned over the years from the sport I love to play, watch, talk and write about.

Moving to Dubai towards end of 2016 from the US to be closer to my aging parents in Kashmir and taking up a new role for Microsoft, the company I worked for, I found cricket thriving amongst the Kashmiri community here in UAE. Kashmiri’s from across various walks of life living in UAE seemed to be coming together in a carnival atmosphere in the shape of Kashmir Super League (KSL) – the only organized cricket tournament for Kashmiri’s anywhere in the world. The annual tournament seemed to attract sponsorships, auctions, and the usual Kashmiri politics, ‘malaal’, ‘roshun’, ‘zaar paar’ and the eventual making up with the customary, ‘kehn na chu, aes ha che baei – it’s ok, we are all brothers’. You add wazwan, nun chai and harissa served at the cricket ground to the mix, it’s a Kashmiri delight for most of us living in UAE.

Having played first class cricket and also represented the US national team in international tournaments, my passion for the sport never waned even as I reached a stage in my life when friends my age, having long hung up their boots were now playing with their grandkids, but I continued to play with a bat and a ball on the green pastures of a cricket field. So moving to UAE after spending almost 3 decades in the US and being amongst my Kashmiri brethren in UAE who loved to showcase their talent and passion on a cricket field, I felt right at home. Most of them were not even born when I left Kashmir and being much older than the young Kashmiri diaspora, I was welcomed with open arms by the Kashmiri cricket fraternity and I took up the mantle of being a mentor, an older brother and even uncle for some of the young aspiring Kashmiri cricketers.

KSL was the brainchild of 4 friends, Inayat Fazili, Imran Malik, Sameel Qureishi and Abrar Reshi who all worked at DU, the leading Telco in UAE. Sipping tea one day and discussing how to provide the young Kashmiri’s an opportunity to play organized cricket, they wanted to develop a platform for the Kashmiri’s who were starved to play the sport they loved in a desert land far away from home. What started off as a small social cricket event amongst a few dozen Kashmiri’s has grown in a short period of time into a brand that Kashmiri’s from all over the world follow live on social media, supporting their favourite teams and expressing their uninhibited passion with comments and ‘dialogs’ that only Kashmiri’s can deliver in their inimitable style. Similar to PSL and IPL, each team in KSL is owned by a sponsor and the teams are picked in an auction that is based upon points rather than currency. Each team gets 20,000 points to select their squad from, with each team allowed to retain up to 5 players including their captain and sponsor.

The final of KSL edition 7 was played at the Dubai International cricket stadium on Sunday, March 6th, 2022 in which Dachigam Hanguls beat Sopore Spartans by 20 runs. It gave me great satisfaction to lift the cup for the Hanguls, a team I put together when I moved to UAE.

I dedicated this win to my late father, Haji Abdul Rashid Khan, in who’s memory I founded the team. My father used to take me to Dachigam as a kid and I’d be mesmerized by the grace, beauty and vulnerability of the Hangul. With the help of my childhood friend, Moin (Jimmy) Qazi, we both sponsored Dachigam Hanguls and with meticulous planning, selected a powerful squad at the auction, that has become the hallmark of KSL. To give you a sense of the commitment, the Dachigam Hanguls squad included 2 players, Bilal Wani and Majid Bashir, both die hard cricketers who drove a thousand kilometres each way from Riyadh to Dubai on weekends to participate in KSL7. This reminded me of my younger days when I would fly from New York to Los Angeles on a 6 hour flight to play a game there on Saturday and fly back during the night to play for my club in New York on Sunday morning.

This showed the commitment, dedication and the desire of the players on the squad to participate in KSL and play for Dachigam, a club that is more like a family. KSL7 had 12 teams and Dachigam Hanguls won 11 of their 13 matches including the playoffs and the final. An enviable record that the boys should really be proud of. Even though the team suffered a couple of hiccups along the way, they rallied back strongly and what made us even stronger was soliciting the help of Ismail Dawood, a former county cricketer from England who represented England at U-19 level and played for Yorkshire, Glamorgan, Worcestershire and Northamptonshire. Ismail is an ECB certified coach and umpire. In cricket, the margins are so small. That is where the discipline, professionalism Ismail instilled in the Dachigam Hanguls squad was part of the reason for the boys to have performed at a higher level compared to the other teams in KSL7.

The Dachigam Hanguls journey that started five years ago when I moved to UAE and formed this team, culminated in us lifting the KSL7 trophy. I was lucky to have the best bunch of guys on the team and I want to thank all of them for their contribution. The tournament would not have been possible without the title sponsorship of Stonehouse Real Estate owned by Moin Qazi, the CEO of KSL, Inayat Fazili, Dr. Ajaz Yasmeen and Taseer Buch (both Finance), Zubair Shah Managing Director and Media, plus several selfless volunteers such as Zahid shah , Zubair Bhat, Mohsin Shah,Iqbal bush, Irfan Ahmed, and Shuja Kamili (commentator) and many others who spent countless hours to run the tournament smoothly. Lastly, thanks to all the team sponsors, who coughed up money to support their teams and make KSL a huge success.