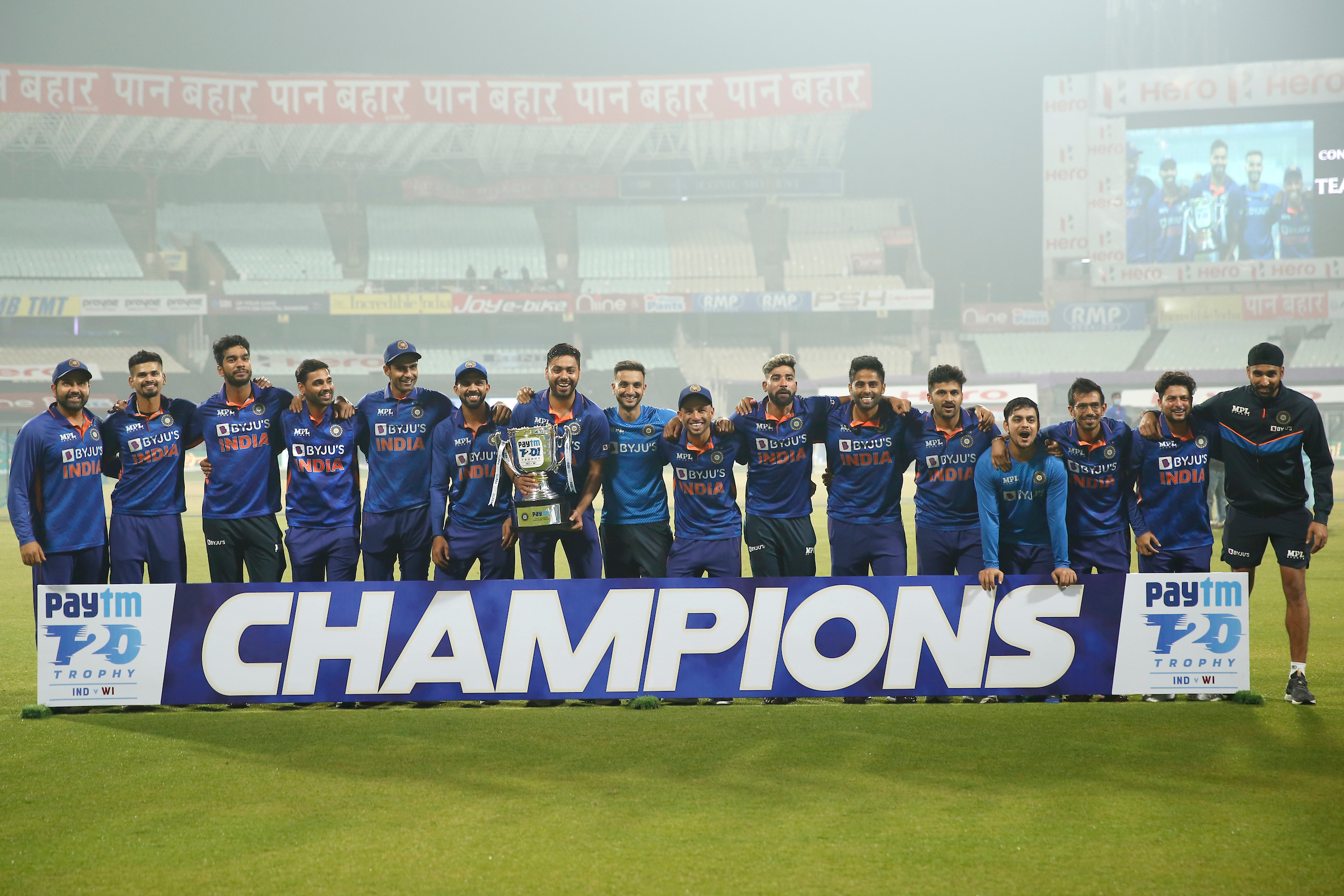 Kolkata, Febuary 21: Suryakumar Yadav (65) and Venkatesh Iyer (35*) helped India post a score of 184/5 before an excellent spell from Harshal Patel (3/22) ensured India won the final T20I against West Indies in Kolkata by 17 runs to complete a 3-0 series clean sweep.

With the fate of the series already decided, both India and West Indies rang in four changes each for the final T20I at Eden Gardens. India handed a debut for Avesh Khan while Ruturaj Gaikwad, Shreyas Iyer and Shardul Thakur also made the final XI. For West Indies, Hayden Walsh Jr., Dominic Drakes, Fabian Allen and Shai Hope found a place in the team.

Opting to bowl first, West Indies broke the partnership between the new opening pair of Gaikwad and Ishan Kishan, with Jason Holder striking early to remove the former. Shreyas Iyer walked in at No.3 and made his intent clear from the get-go. Both the batters continued to play attacking cricket and ensured that the early wicket doesn’t hamper the innings.

West Indies desperately needed to break the partnership and Hayden Walsh answered the call, with Iyer holing out in the deep trying to hit a maximum. The visitors struck again in the next over as Roston Chase’s tremendous series with the ball continued. Kishan, in his attempt to pull against the spin, had his stumps broken.

Rohit Sharma’s decision to bat at No.4 didn’t work out as he struggled to get going and was bowled for 7 by Dominik Drakes. Thankfully for India, Suryakumar Yadav kept the scoreboard ticking with a few big shots and was joined by Venkatesh Iyer who matched him blow for blow.

The pair would then unleash carnage in the final few overs playing some sparkling shots. Suryakumar Yadav would score a blazing 31-ball 65, getting dismissed off the last delivery of the innings by Romario Shepherd. Iyer would also make a great contribution, scoring an unbeaten 19-ball 35. Between the 16th and 20th over, India would score 86 runs, finishing off their innings at 184/5.

Defending the total, it was the perfect start for India as Deepak Chahar struck in his first over itself. Getting the ball to move away from Kyle Mayers, he induced the faintest of nicks which was initially adjudged not out by the umpire. Rohit Sharma reviewed successfully though and India had their first breakthrough.

After Avesh Khan’s expensive over, Chahar would strike again getting another delivery to move to get the scalp of Shai Hope for 8. In a big blow for India though, Chahar would pull up with an injury before bowling the final delivery of the over.

Rovman Powell and Nicholas Pooran would embark on a counter-attack against the Indian bowlers in the Powerplay, a tactic that was working quite well. Powell especially played some meaty strokes continuing on from his form in the last match.

The introduction of Harshal Patel into the attack would then do the damage as Powell could not get the required connection, with Shardul Thakur taking a brilliant running catch to bring an end to his knock of 25.

Skipper Kieron Pollard too could not last long at the crease, perishing against Venkatesh Iyer after a subdued 7-ball 5. The onus was now on the well-set Pooran to get West Indies closer to the target. The equation was 98 required off the final 10 overs.

A short break due to drinks would do further damage to the Windies cause as Jason Holder tried a big heave against Venkatesh Iyer but could only find Shreyas Iyer in the deep.

Harshal Patel would continue his impressive spell bowling Roston Chase out for 12 with a deceptive slower delivery. India were now firmly in command with Pooran the last hope for the visitors.

He would get some support from Romario Shepherd, who started to swing from the very off. Bringing up his third fifty in a row, Pooran set himself up perfectly to tee off in the final four overs.

Thakur though struck at the perfect moment for India in the 18th over as a well-executed slower delivery brought about a mistime from Pooran, who was out after an excellent knock of 61. West Indies required 31 off the final two overs with Shepherd looking in devastating touch.

Patel would then come up with an exceptional penultimate over where he dismissed Shepherd for 29 and conceded only one run, leaving Shardul to defend 23 in the final one. It was an excellent spell with figures that read 3/22 off 4 overs.

And he would do exactly that as India ended up as victors by 17 runs to complete a 3-0 series whitewash, with West Indies ending their tour without a single victory.