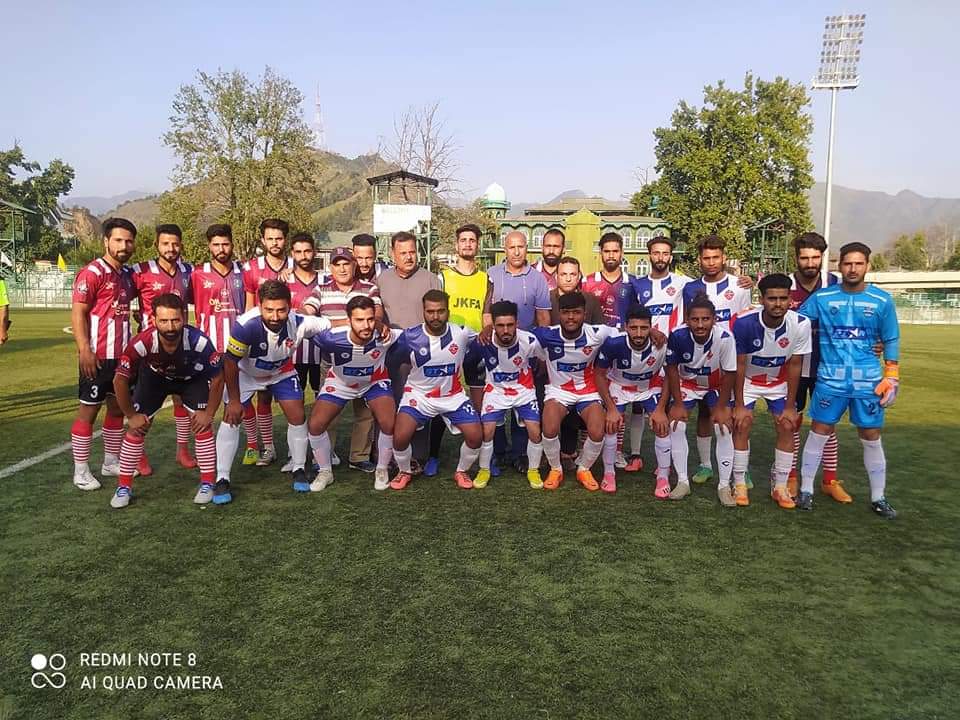 The match was played between Kashmir United FC and Galaxy FC .Both the clubs started with an aggressive note trying to creat gaps to find the net. In the 24th minute Galaxy FC was awarded a penalty kick for an offense inside the penalty area and Syed Fakhar made no mistake in converting the penalty into a goal. Kashmir United FC could their best to equalise although they made certain good moves at the opponents goal but could not succeed. The Ist half was evenly balanced and the score at half time was 1:0 in favour of Galaxy FC.

The second half saw tactical Football and Kashmir United FC leaving no stone unturned to go for an equaliser. Their efforts bore fruits when Firdous Ahmad succeeded in equalising a goal in 48th minute. Both the teams tried hard to take the lead but of no avail, and the match ended in a 1:1 draw.

The 2nd match was played between Syed Tajudin FC and Hamdaniya FC. Both the teams played quality game and missed some good chances. Their efforts were applauded by the spectators. Perfect ball control man to man marking , superb Head work were the main features of the game .

In the 15th minute of the Ist Half Firdous of Hamdaniya FC scored a magnificent goal which took every body by surprise. At half time Hamdaniya FC was leading by one Goal.

The 2nd half started with an aggressive note and Syed Tajudin FC trying to find an equalizer. In 44th minute Syed Tajuddin FC succeeded in scoring a goal through Harish. Both the teams geared up and tried hard to take the lead but it was Syed Tajuddin FC who scored back to back two goals in 60th & 61st minute through Lucky. Syed Tajuddin FC maintained 3:1 goal lead till the final whistle.