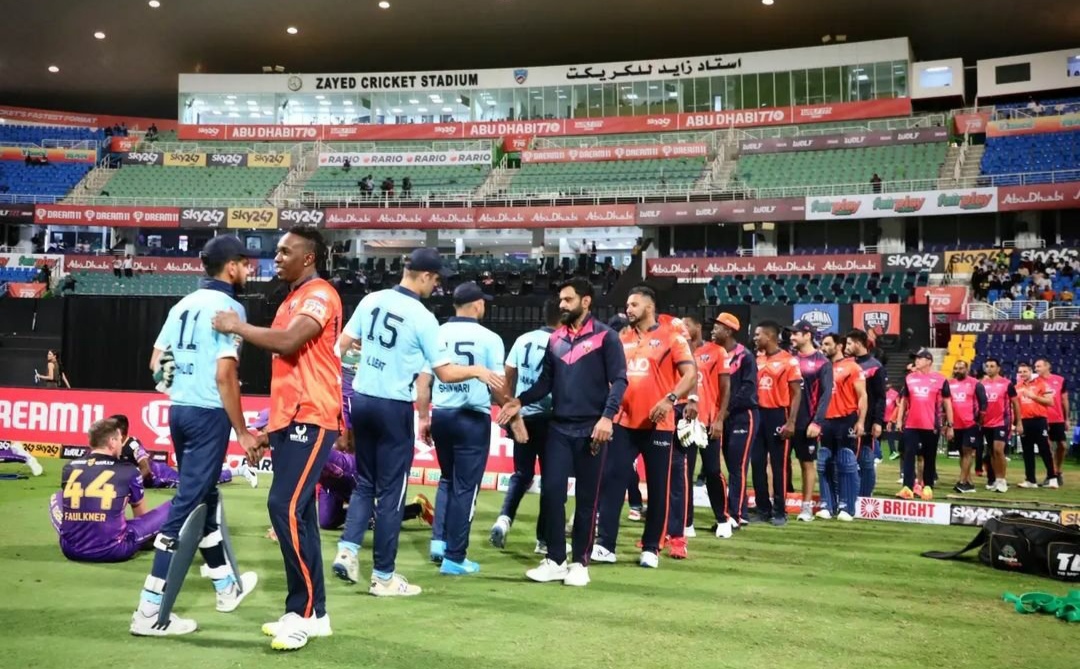 Abu Dhabi, November 22: Skipper Dwayne Bravo and Eoin Morgan innings ensured that the Delhi Bulls walked off with a five-wicket victory in their Abu Dhabi T10 match against The Chennai Braves on Sunday, November 21.

After being put into bat by the Delhi Bulls, The Chennai Braves put up 124/2 in their 10 overs. After the Delhi Bulls lost their top four batsmen cheaply, the experienced duo of Bravo (43 runs from 17 balls) and Morgan (26* runs from 12 balls) strung a partnership of 56 runs in 22 balls, which helped the Delhi Bulls chase down their target in 9.4 overs.

The Delhi Bulls suffered a huge blow when Munaf Patel removed Rilee Rossouw and Sherfane Rutherford in the second over. Roman Walker made matters worse when he dismissed Rahmanullah Gurbaz and Mohammad Hafeez in the fifth over.

Thereafter, Captain Bravo got things moving with the Bulls as he smashed three boundaries off Dasun Shanaka’s bowling in the sixth over. Curtis Campher kept The Chennai Braves’ hopes alive when he removed Bravo in the ninth over. However, Morgan and Romario Shepherd scored 14 runs in the last over and closed out the game for the Delhi Bulls with two balls to spare.

Earlier, Bhanuka Rajapaksa played a blistering innings of 64* runs from 31 balls, laced with 6 fours and 4 sixes and helped The Chennai Braves post a high total on the board. Rajapaksa took on Mohammad Hafeez, smashing him for two boundaries and a six in the fourth over.

The opening batters Rajapaksa and Mark Deyal produced some fantastic hits and recorded a partnership of 81 runs from 34 balls.

After losing Deyal and Dasun Shanaka in quick succession, Ravi Bopara joined the party as he smacked Fazalhaq Farooqi and Romario Shepherd for a boundary and a six in the ninth and tenth overs respectively. Bopara remained unbeaten on 19 runs from 11 balls as The Chennai Braves raised their score to 124/2 in their 10 overs.