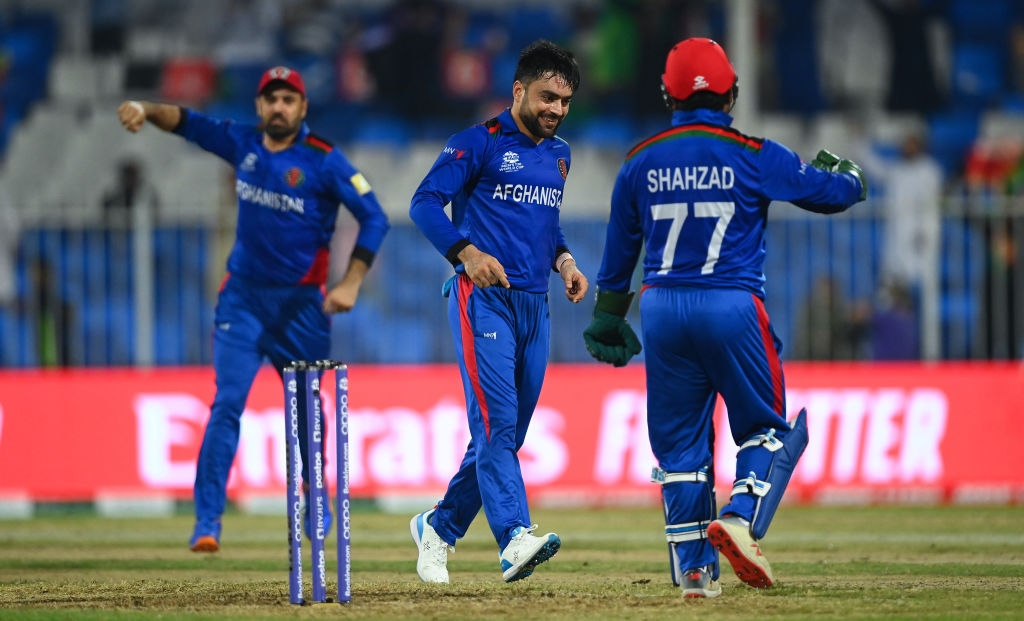 Sharjah, October 25: Afghanistan strolled to a 130–run victory over Scotland in their opening match of Group 2 in ICC Men’s T20 World Cup 2021.

Scotland had been set 190 to beat thanks to big hitting and fast running from Najib Zadran, Hazratullah Zazai and Rahmanullah Gurbaz.

Mujeeb Ur Rahman was the star of the second innings, taking five wickets on his T20 World Cup debut, as Scotland were bowled out for 60.

Afghanistan won the toss and chose to bat first, and after a tidy over from Brad Wheal, who conceded just two runs, the Afghanistan openers started to tee off.

Mohammad Shahzad hit the longest six of the Super 12s so far, firing a delivery from Wheal’s second spell 101 metres before departing for 22, caught in the deep off the bowling of Safyaan Sharif.

Mark Watt dismissed Hazratullah Zazai but only after Zazai had made 44 off 30 balls, the ball bouncing off his bat onto his pads and into the stumps.

Rahmanullah Gurbaz and Najib Zadran then combined to keep Afghanistan’s fast scoring going, running quickly between the wickets as Afghanistan’s 100 came off 74 balls.

The pair added 87 runs off 51 balls with Zadran doing most of the boundary scoring, but Gurbaz was always his willing partner in the running until he was caught on 46.

Zadran then claimed the longest six title with a boundary sailing 103m before holing out on the final ball of the innings as Afghanistan set Scotland what would be their record chase of 191.

George Munsey started quickly, scoring 11 off the first over, but Kyle Coetzer could not go with him, falling for 10 with Scotland at 28 for 1.

Calum MacLeod came in and was immediately given out lbw with a review not able to save him and with the captain and the architect of their famous one-day win over England gone, Scotland were in trouble.

Richie Berrington defended the hat-trick ball safely, but two deliveries later was given out, like MacLeod for lbw and again on umpire’s call. Mujeeb Ur Rahman was the delighted bowler ending the over with figures of 3 for 7.

A third duck in a row soon came with Matthew Cross going to an incredible take from wicketkeeper Shahzad, fine margins were deciding Scotland’s wickets.

There was nothing close about Scotland’s next dismissal with Mujeeb clean bowling Munsey to bring out Greaves, Scotland’s hero against Bangladesh.

Things became even more difficult for Scotland with Rashid Khan, number three in the ICC MRF Tyres T20 bowlers rankings came on to bowl. It took him just three deliveries to get a wicket, that of Michael Leask, Scotland’s fourth batter who failed to trouble the scorers.

Watt could only add one to the total before Mujeeb picked up his wicket and with it his five-fer, taking five for 20 from his four overs in an utterly dominant spell.

Rashid Khan would then take two in two, to end with figures of four for nine and seal a huge victory.

Player of the Match: Mujeeb Ur Rahman (Afghanistan)