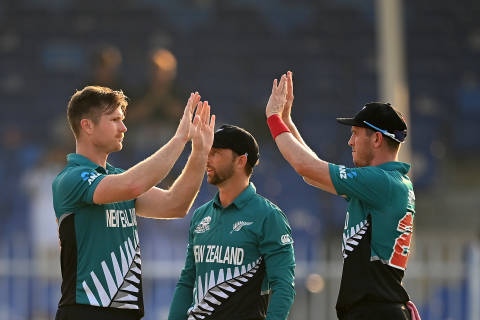 Dubai, November 7: New Zealand bowler Ish Sodhi reckons his side need to do the basics right to beat Afghanistan and secure a spot in the ICC Men’s T20 World Cup 2021 semi-finals.

The Blackcaps know that victory in their final Super 12s Group 2 clash will see them progress alongside Pakistan into the last four.

Afghanistan need to win to stand a chance of qualifying on net run-rate but a victory is more likely to send India through via the same means if they beat Namibia later on Sunday.

Sodhi said: “I think if we keep it as simple as trying to adapt to the conditions best as we can, and being aware of the threats that Afghanistan pose and also taking into consideration the things we’ve done really well.

“If we can do them really well, I think then we can put on a good performance and all that other stuff takes care of itself.

“It’s quite simple for us to keep focusing on what we’ve been doing well. If we put on a good performance and we come away with a win that means we go to the semis, and that will be great.

“If we get the basics right for a long enough period of time, keep doing the things we’ve been doing well, I think we’ll give ourselves a good chance.”

New Zealand come into the all-important game full of confidence after Martin Guptill’s 93 helped them to victory over Scotland last time out, but Sodhi knows his side will have to be wary of Afghanistan’s dangerous spin attack.

He added: “I think, although regardless of the equations, we’re really aware of the strengths that Afghanistan bring both with the bat and the ball, especially in the spin bowling attack. Being a day game, I’m not too sure if dew is going to play much of a factor.

“They are spearheaded by Rashid Khan, obviously Mujeeb Ur Rahman is phenomenal as well.

“But Mohammad Nabi is a very cagey off-spinner and bowls well through the powerplay too. That’s definitely where their threat lies with their bowling attack and I’m sure all the batsmen during the scouting meeting have taken it into consideration.”

Afghanistan’s Hashmatullah Shahidi called on his side’s batters to deliver against the big teams to back up their spinners as they look to squeeze into the last four with a win at Zayed Cricket Stadium in Abu Dhabi.

He said: “Our spinners are really good, especially in these conditions. We have played a lot of cricket here and we have the benefits.

“But against the big teams we should bat better and the batsmen should take responsibility to play well against them.”

“We only focus on ourselves, our team. Our main focus is how we qualify for semi-finals and we’ll do our best to qualify.”