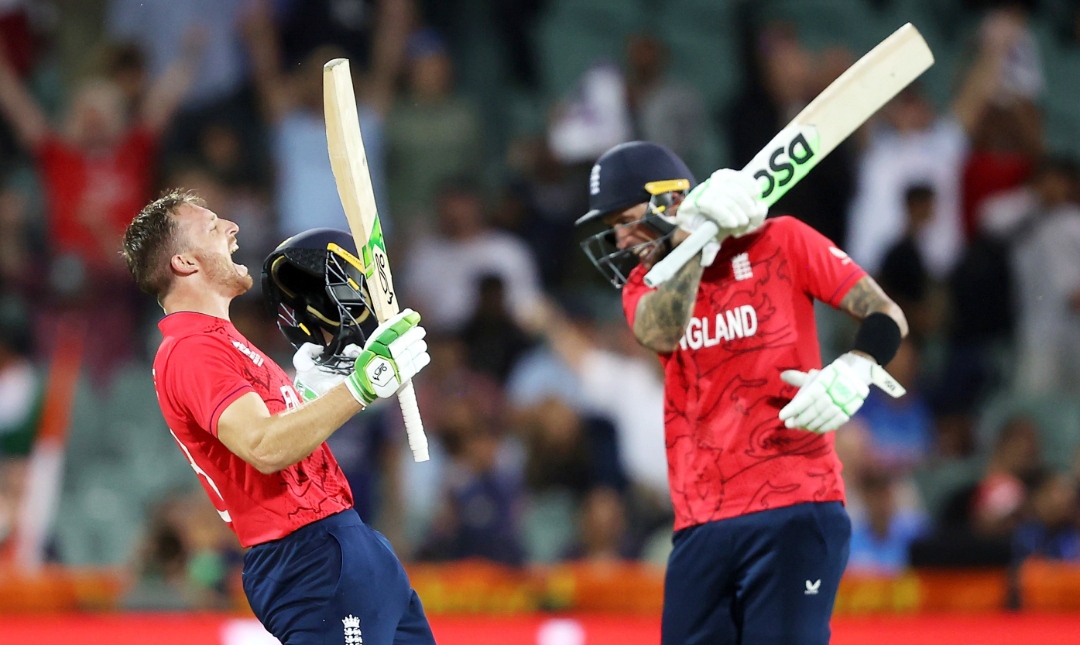 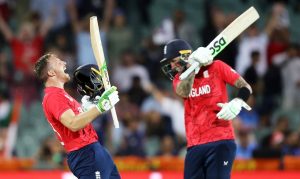 Adelaide: It was total dominant batting display as skipper Jos Butter and Alex Hales power England to a crushing 10 wicket win over Team India in the semifinal in Adelaide on Thursday to set up T20 World Cup 2022 final clash against Pakistan in MCG on Sunday.

The England opening duo put on a stellar show in Adelaide as they went on the charge against the Indian bowlers right from the beginning of their innings. It was Hales, who smashed the Indian bowlers earlier in the innings as Buttler played the second fiddle. But the English skipper joined the party in the second half of the innings, as soon as England got a firm grip on the match.

Their partnership helped England in chasing down 169 with all 10 wickets and 24 balls to spare. Hales remained unbeaten on 86 from just 47 deliveries while Buttler scored 80* from 49 deliveries

Earlier, India had a difficult start to their innings as they lost the wicket of KL Rahul early. Virat Kohli and Rohit Sharma tried to build a partnership but some really tight bowling by the England bowlers didn’t allow them to score at a swift rate.

Rohit departed for 27 from 28 deliveries in the ninth over of the innings, whereas Suryakumar Yadav also perished soon for 14. But Kohli and Pandya stuck around and took the game deep. Kohli got dismissed just after scoring his fifty in the 18th over. But Pandya carried on and went on an onslaught to take India to a competitive score of 168/6 in their 20 overs. Pandya’s efforts helped India in adding 68 runs in the last five overs, 54 of which came from Pandya’s bat.

England’s massive win against India has helped them in setting up a T20 World Cup final clash against Pakistan. Both teams finished second from their respective groups in the Super 12s and their chances of securing a semi-final spot at one stage looked very unlikely. But both sides made a terrific comeback not only to reach the semis but also to go all the way to the finals. The two teams last met in a World Cup final in 1992, which Pakistan won. England will be looking to set the record straight now by lifting the trophy at the iconic MCG in Melbourne.

Fast bowler Mark Wood (hip) and key batter Dawid Malan (groin) were ruled out prior to the toss, with veteran seamer Chris Jordan and top-order batter Phil Salt named as their replacements.

The loss of Wood in particular was a blow to England, with the pacer already having picked up nine wickets at the T20 World Cup and regularly hit speeds in excess of 150 km/h.

His spot in the XI was taken by Jordan, who is a veteran of 82 T20Is and last featured for England during their series against Australia just prior to the start of the T20 World Cup.

Salt didn’t play during that same series, with the 26-year-old’s last match for England coming during their seven-game series in Pakistan at the start of October.

Buttler said prior to Thursday’s match that he has confidence in all members of his talented squad.

“We’ve got some fantastic players who have not yet played in the tournament, and they’re all desperate to make their mark if given a chance,” Buttler said.

“I have full faith in every member of our squad, guys whether they’ve played so far or not.”

India stuck with the same XI that defeated Zimbabwe by 73 runs in the final match of the Super 12 stage of the tournament, meaning left-hander Rishabh Pant was preferred to Dinesh Karthik.