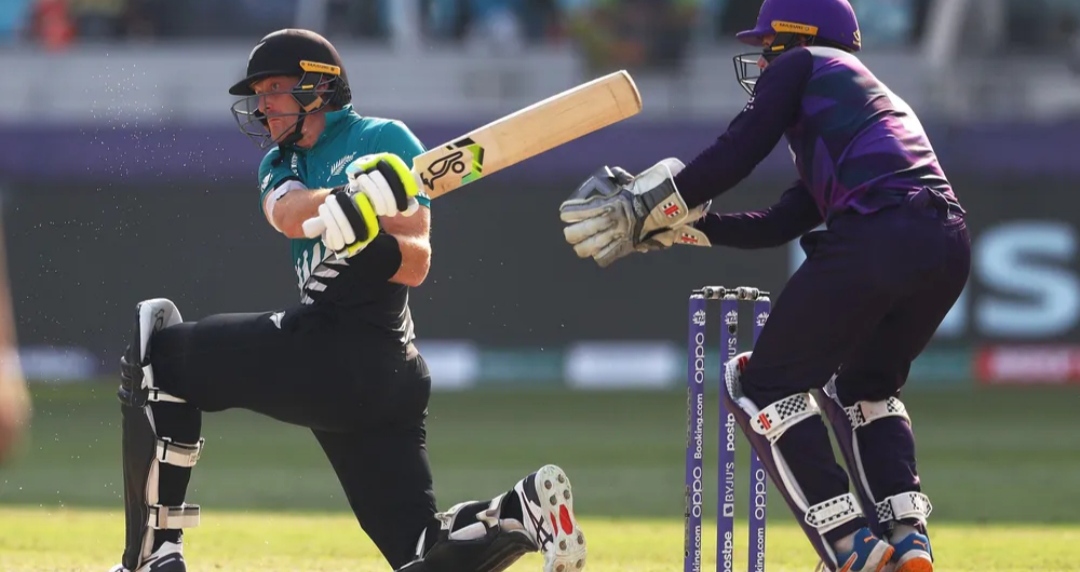 Dubai, November 3: Martin Guptill’s electric 93 helped New Zealand underline their semi-final credentials and knock Scotland out of the tournament with a comfortable 16-run victory in Dubai.

Opener Guptill blitzed seven sixes, the most of any innings so far at the ICC Men’s T20 World Cup 2021, in a boundary-filled 93 off 56 balls and shared a stand of 105 with Glenn Phillips, who made 33, to help New Zealand recover from 52 for three to post 172 for five.

Scotland had done well to ensure they were not chasing more but the total turned out to be enough as regular wickets prevented them from ever mounting a serious challenge with No.6 Michael Leask’s unbeaten 42 off 20 balls turning out to be too little too late as the defeat ended their chances of progressing further in the competition.

After being put in to bat, New Zealand got off to a fast start as Guptill and Daryl Mitchell pushed the Black Caps up to 35 without loss after four overs.

That all changed when Safyaan Sharif took two wickets in five balls, removing Daryl Mitchell lbw for 13 before crucially strangling New Zealand captain Kane Williamson down the legside for a duck.

Unperturbed by the carnage at the other end, Guptill became the second batter, after India captain Virat Kohli, to chalk up 3,000 T20I runs with a booming six off Alasdair Evans as New Zealand took 16 from the last over of the powerplay, reaching 52 for 2.

Spinner Mark Watt made an immediate impact having Devon Conway caught behind for just one as he tried to reverse sweep his very first ball, wicket-keeper Matthew Cross taking another excellent catch behind the stumps.

Scotland continued to slam the brakes on after the powerplay with just 18 runs coming from four overs as New Zealand made it to 70 for three at the halfway stage.

However, Guptill started to motor and brought up an excellent half-century off just 34 balls with an almighty 102m six off Chris Greaves, becoming the first man to hit 150 T20I maximums.

Guptill found solid support in the form of Phillips but his partner was given a reprieve on 20 when Leask, struggling with the sun in the deep, shelled a catch off Greaves.

Leask could have redeemed himself shortly after by snaffling Guptill on the boundary edge but again he lost the flight of the ball as it landed just over the rope for a six off Brad Wheal.

Despite visibly struggling with the heat in Dubai, Guptill set about trying to ruin Sharif’s figures, lamping the seamer for two sixes in the 16th over which cost 17.

Scotland persisted with bowling back of a length and Guptill continued to oblige by sending the ball out of the park and soon brought up the 100 partnership with Phillips from just 71 balls with a single off Watt, who escaped with impressive figures of one for 13 from his four overs.

A stand of 105 was soon ended when Phillips, 33 off 37 balls, skyed one to Greaves in the deep off Wheal.

An exhausted Guptill fell agonisingly short of a century the very next ball, chipping straight to Calum MacLeod at long-on and trudging off for a very well-made 93, 66 of which came in boundaries.

Those two wickets helped Scotland restrict New Zealand to just 22 runs from the last three overs, leaving them 173 to win when it could have been even more.

Back in the side after injury, Scotland captain Kyle Coetzer made a sprightly start to the chase, hitting four boundaries on his way to 17 from 11 before Trent Boult’s knuckle ball deceived him and he was caught by Tim Southee in the third over.

Adam Milne’s searing pace greeted Cross’s arrival to the crease and the Scottish gloveman initially had no answer, facing out a maiden.

But when the two were reacquainted in the final over of the powerplay, Cross certainly made up for his slow start by smoking Milne for five consecutive fours to drag Scotland up to 48 for one after six.

George Munsey, 22 off 18, took up the gauntlet after Ish Sodhi’s introduction to the attack, swatting the spinner for back-to-back sixes over the legside.

But the opener perished two balls later when he did not get all of a full toss, allowing a knee-sliding Southee to take a splendid catch on the move down the ground.

Richard Berrington joined Cross and after ten overs Scotland were 76 for two, six runs and one wicket better off than New Zealand were at the same stage but still needing another 97 to pull off an upset.

However, Southee poured cold water on Scotland’s hopes of an unlikely win when his nip-backer bowled Cross for 27.

And when MacLeod’s attempted scoop ended in him being bowled by Boult for 12, Scotland needed a miracle with 71 runs off 31 balls required.

Berrington’s departure for 20 realistically signalled the end of Scotland’s hopes and although Leask entertained with three late sixes it only served to narrow the deficit as they finished on 156 for five.