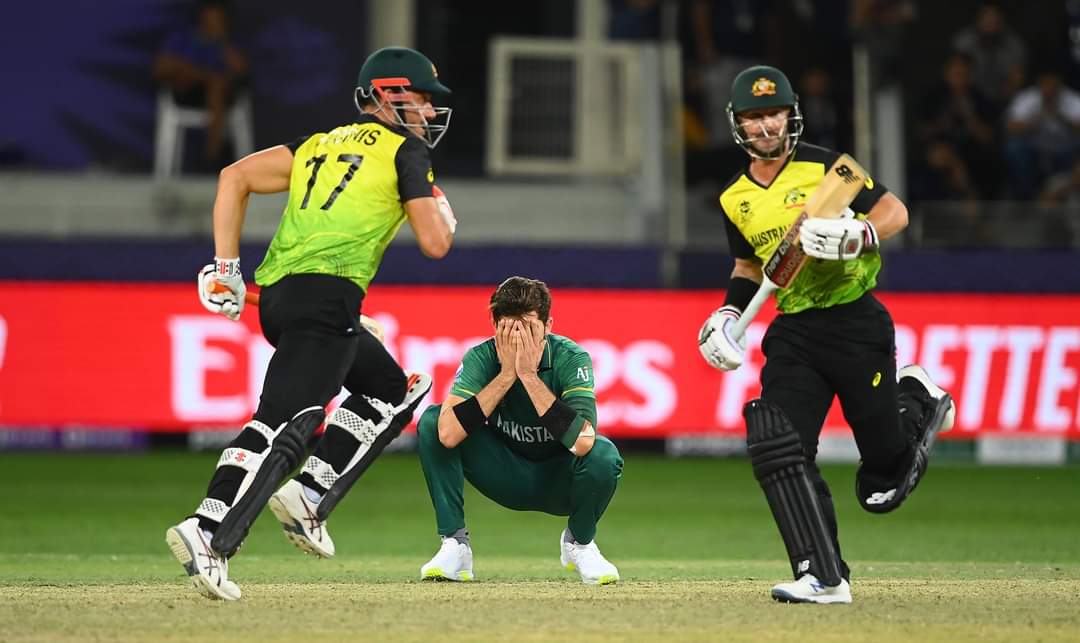 Dubai , November 12: Matthew Wade and Marcus Stoinis produced a brilliant partnership to carry Australia to a stunning five-wicket victory over Pakistan and set up a date with New Zealand in the final of the ICC Men’s T20 World Cup 2021.

When David Warner and Glenn Maxwell fell in successive overs from Shadab Khan, the chase of 177 seemed doomed, but Stoinis and Wade had other ideas as they put on 81 in 7.4 overs.

Stoinis started the comeback as he went after Haris Rauf, but it was Wade who did the most damage with three consecutive sixes off Shaheen Shah Afridi after being dropped by Hasan Ali to seal an unlikely success.

Pakistan had made 176 for four batting first thanks to half-centuries from Mohammad Rizwan and Fakhar Zaman, while Shadab Khan’s four for 26 looked to have swung the game their way.

But this Australia team has already shown incredible resolve in this tournament and it was the case again here as they dug themselves out of a hole to reach a second ICC Men’s T20 World Cup final.

It was a remarkable game, with Pakistan batting consultant Matthew Hayden revealing that Rizwan had spent the previous night in hospital with a lung problem, but he was fit to take his place in Dubai as Pakistan were put in to bat.

And while he looked very nervous early on, Babar Azam was able to score quickly before Rizwan settled in.

He was almost dismissed off Maxwell, a surprise choice to bowl in the powerplay, with Warner racing back but not quite able to take a stunner over his shoulder.

The turning point for Rizwan seemed to be the first ball of the fifth over from Josh Hazlewood which he smashed for six over the legside, before being given a second life, Adam Zampa this time putting down a tough chance off the last ball of the powerplay when it was whipped flat down to him at long leg but slipped from his grasp inches from the ground.

With 47 for none, Pakistan had their best score of the powerplay in the tournament and Babar continued to press on. But Maxwell and Zampa then managed to stem the flow of runs and that pressure told as Babar tried to take on the latter, picking out Warner on the boundary.

Maxwell’s bowling was proving crucial, ensuring that Australia’s fifth bowler would not prove the weak link as he went for just 20 from three overs.

Rizwan’s charge was slowed by a vicious short delivery from Mitchell Starc which rattled into the grill on his helmet.

He responded by hitting Hazlewood for six before getting to his half-century the next delivery.

In this tournament, Pakistan have been exceptional in the final four overs, and it was no different here as Fakhar finally found his groove, smashing Hazlewood for six over long-on before Rizwan put a high full toss away for four and the resulting free hit into the stands for six. With 21 off that over and 49 off his four, Hazlewood proved expensive.

Eventually, Rizwan went for 67, scooping Starc to mid-off, but Fakhar, the only Pakistan batter who had not really fired in this tournament to date, had his eye in. The next ball he smashed Starc miles back over his head before almost taking out umpire Chris Gaffaney with a straight four.

Asif Ali had averaged a six every three balls in this tournament, but he could not contribute this time, picking out Steve Smith on the boundary on his first ball, from Pat Cummins.

It should have been two in two but Smith put down Fakhar next ball, running in from the boundary as he watched the ball bounce out of his hands.

While Cummins went for just three runs off the 19th over, and Starc removed Shoaib Malik at the start of the last, back-to-back sixes from Fakhar took him to an unbeaten 55 and Pakistan to an imposing 176 for four.

Australia’s chase got off to the worst possible start as Shaheen produced one of the overs of the tournament to kick things off. He trapped Aaron Finch leg before off the third delivery, then Mitchell Marsh almost suffered the same fate from a yorker next ball, surviving the review thanks to a pair of umpire’s calls.

In the fourth over, Warner started to take a liking to Imad Wasim, and as he and Marsh got going, suddenly Australia were motoring along.

By the end of the powerplay, they had 52 for one, the best of any team against Pakistan, but Shadab did for Marsh, a steepling catch well held by Asif as he fell for 28.

Mohammad Hafeez was brought into the attack and his first ball gripped in the hand and came out all wrong, bouncing twice before Warner lifted it into the stands, a no-ball rubbing salt into the wounds.

Steve Smith became Shadab’s second victim, again trying to attack and finding the fielder in the outfield, Fakhar the safe pair of hands on this occasion.

Warner was nearly run out after a misjudged single from Maxwell gave Fakhar a chance with a direct hit.

It felt like Warner had the win at his fingertips, while he was there, Australia were favourites. But the ball after the drinks break he went after one from Shadab that went away from him, nicking through to Rizwan. The elation from bowler and keeper as Warner fell for 49 told its own story.

Remarkably, a replay appeared to indicate that Warner had missed the ball, but like everyone else, he obviously thought he had hit it, choosing not to review.

Shadab was piling on the pressure and he got another, again with the help of some good fielding, as Haris Rauf caught Maxwell with a diving grab in the deep from a reverse sweep as Australia’s most destructive batter departed for seven.

It was down to Stoinis and Wade and after another fine over from Shaheen, the equation was 62 from five overs.

Stoinis was first to take on the bowlers as targeted Haris, with a huge six over midwicket followed by a four driven straight back past the bowler.

The next over it was Wade who stepped into Hasan, hitting him back over his head for six to bring up the fifty partnership as Australia took 15 off the over in all, leaving 22 to get off two.

Shaheen returned for the penultimate over and Hasan had the chance to remove Wade, dropping the keeper in the outfield after he did not connect with a heave over midwicket. A ball later, Wade jumped across his stumps and scooped Shaheen for six to take Australia to within touching distance.

The next ball suffered the same fate, picked up and smashed over the leg side before he finished the job in style with a third maximum.