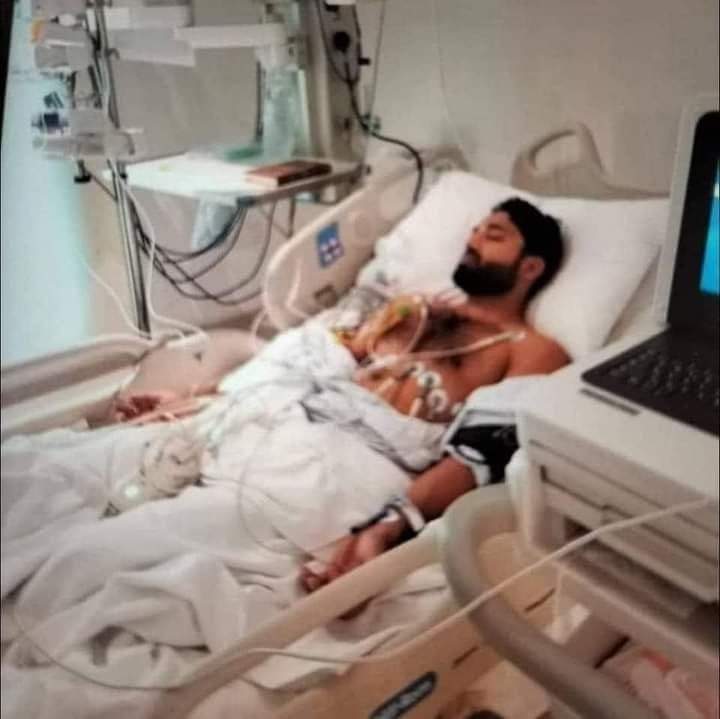 Rizwan scored 67 in the match that included four sixes , before it was revealed he had been battling a serious chest infection.

While it was known before match that Rizwan was not fit, but actual details about his condition were revealed after the match by Pakistan cricket team team doctor.

“Mohammad Rizwan developed a severe chest infection on 9th of November after which he was admitted to the hospital,” Pakistan’s team doctor Najeebullah Soomro was quoted as saying.

He was only released on the morning of Thursday’s semi-final, helping Pakistan to 4-176 before Matthew Wade and Marcus Stoinis fought back to get Australia home with an over to spare.

Pakistan senior journalist Saj Sadiq posted picture of Rizwan while being in ICU.

“Mohammad Rizwan in hospital the night before the match against Australia. He had developed a severe chest infection and spent 2 nights in the ICU,” He Tweeted with the pic.

“He spent two nights in the ICU recovering. He made an incredible recovery and was deemed fit before the match.

“We can see his great determination and tenacity that shows his spirit of performing for the country. And we can see how he performed today.”

Meanwhile duing the match Rizwan also managed to shake off a Mitchell Starc bouncer to the helmet and later had a near faultless display with the gloves.

Three of his sixes came off Josh Hazlewood, while another was a massive sweep shot off Adam Zampa.

“This is a warrior, he’s been brilliant through the campaign and he’s got great courage,” Hayden said in his role as Pakistan’s batting coach.

Pakistan captain Babar Azam, who put on an opening stand of 77 with Rizwan, also praised his determination.

The way he played today it was exceptional. When I saw him he was a little bit down.

“But when I asked him about his health he said, ‘no, I will play’.”

Pakistan’s loss to Australia was their first in this tournament, given they were undefeated through their Super 12 group and spent large parts of the past five years as the top-ranked T20 team.

With inputs from Cricket.com.au.