Sharjah, October 22: Namibia made history by qualifying for the ICC Men’s T20 World Cup 2021 Super 12 stage in their very first appearance at the tournament after beating Ireland in a winner-takes-all Group A shootout.

The African nation timed their chase of Ireland’s 125 for eight to perfection as a half-century from skipper Gerhard Erasmus and pyrotechnics from David Wiese led Namibia, 19th in the MRF Tyres ICC Men’s T20I team rankings coming into the tournament, to a phenomenal eight-wicket victory.

The two put on a match winning partnership of 53 in 5.1 overs as Erasmus finished 53 not out from 49 balls and Wiese, the matchwinner against Netherlands, struck an unbeaten 28 at a strike rate of 200 to also secure Namibia’s spot in the ICC Men’s T20 World Cup 2022 in Australia.

After only making 27 in the powerplay and sitting at 49 for one at the halfway stage, it looked like Namibia may have left themselves too much to do in reply to Ireland’s innings of two halves.

Ireland captain Andrew Balbirnie had elected to bat first at Sharjah Cricket Stadium, and when experienced duo Paul Stirling and Kevin O’Brien steered them to 55 without loss in the all-important powerplay, he would have been hoping for far more than the 125 they eventually mustered.

Having shared stands of just eight and 27 in their opening two games, the pair made full use of the fielding restrictions, putting on 62 for the first wicket in 7.2 overs, with Stirling looking particularly fluent on his way to a well-made 38 off 24 balls, including five fours and a six.

But when the former Middlesex man was caught at long-on off the bowling of Bernard Scholtz, attempting to land his 250th six in T20 cricket, it triggered a change in fortune for the men in green as they went on to add only 57 runs in the remaining 11.2 overs.

O’Brien soon followed for 25 as he holed out off the bowling of the impressive Jan Frylinck, who finished with Namibia’s best-ever World Cup figures of three for 21, as Ireland lost two wickets for five runs in the space of just eight balls.

Things could have been even better for the tournament debutants as Ireland skipper Balbirnie enjoyed a charmed existence.

The 30-year-old narrowly avoided being run-out before surviving a huge lbw appeal from Pikky Ya France, which Namibia surprisingly declined to review despite DRS showing it would have been overturned.

No-one outside the top three made it into double figures for Ireland the final four overs began with Balbirnie’s dismissal for 21 and Ireland scored just 24 for the loss of five wickets as Wiese, two for 22, and JJ Smit, one for 27, shone at the death with the ball.

Namibia made a steady start in pursuit of 126 and only a phenomenal one-handed catch from Kevin O’Brien saw the back of in-form opener Craig Williams for 15 off 16 balls off the bowling of Curtis Campher.

No.3 Erasmus survived an lbw shout on just two off Mark Adair which would have sent him packing if Ireland had reviewed but he took full advantage steering his side home.

The 15th over proved crucial as two booming sixes from Wiese changed the course of the game before Erasmus again escaped, Craig Young’s delivery clipping his stumps without dislodging the bails.

Fittingly after Erasmus had brought up his 50, it was Wiese who sealed victory with nine balls remaining, smashing a boundary off Young to spark the celebrations. 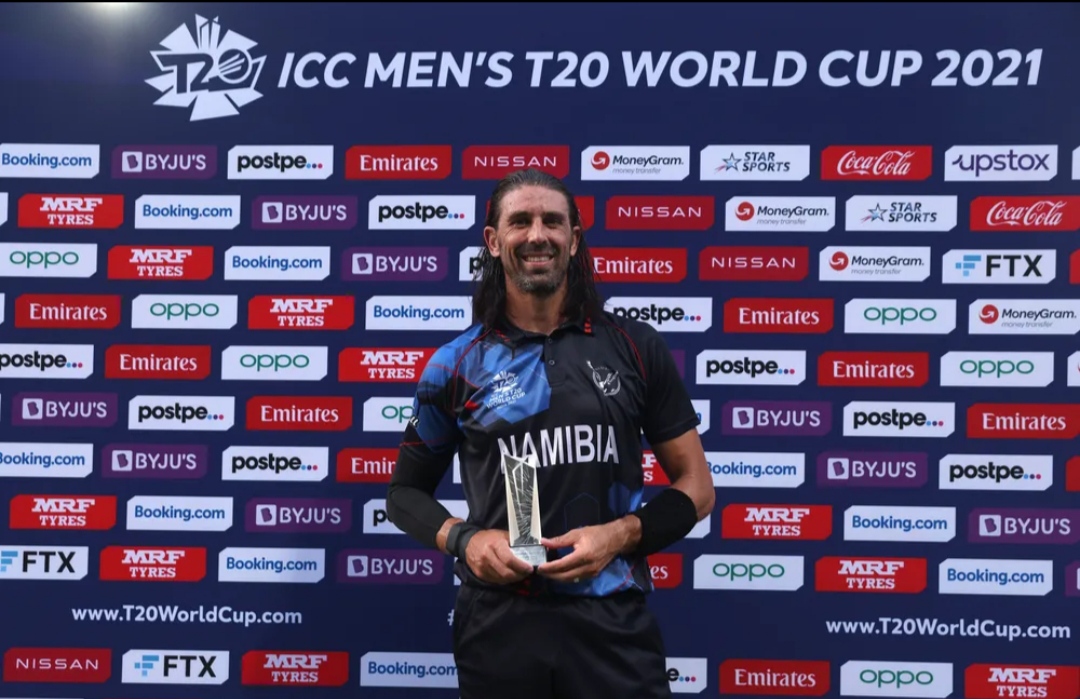