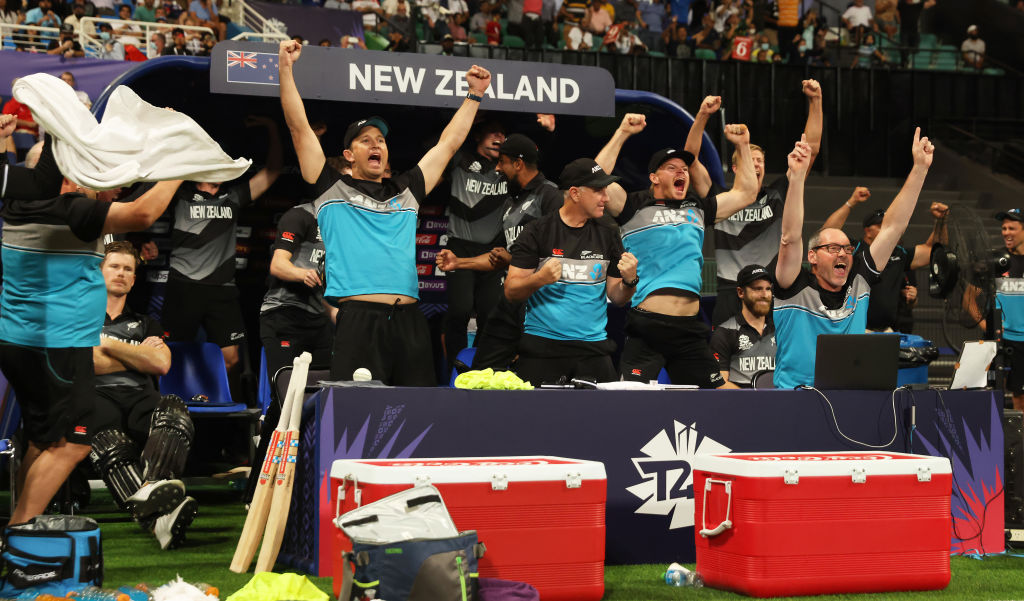 Abu Dhabi, November 11: It seemed nigh-on impossible that England and New Zealand would be able to recreate the drama of their last World Cup meeting – but they gave it their best shot.

It seemed nigh-on impossible that England and New Zealand would be able to recreate the drama of their last World Cup meeting – but they gave it their best shot.

While this semi-final was not decided by the barest of margins – the Black Caps staggeringly getting home with an over to spare having needed 57 from the final four – it contained an abundance of twists and turns which left neither side feeling totally in control until the outcome was decided.

And just as at Lord’s in 2019, Jimmy Neesham was at the heart of a crucial period in the contest.

Whether at the crease or on social media, Neesham has long been one of cricket’s great entertainers.

Having been at the non-striker’s end for the run out which decided the most dramatic of Cricket World Cup finals 18 months ago, Neesham took to Twitter to declare: ‘Don’t take up sport, kids. Take up baking or something’.

And it was in the pressure cooker that Neesham found himself when he entered the fray in Abu Dhabi.

The 31-year-old had watched from the dugout as hard-hitting players on both sides had found the going tough, with batters having to play themselves in before going for the jugular.

Neesham had no time for that particular luxury, with the required rate above 14 and time running out when he joined Daryl Mitchell following the quickfire dismissals of Devon Conway and Glenn Phillips.

The Black Caps needed a big over and Neesham was the man who provided it as the tide turned in dramatic style.

Both his sixes off Chris Jordan carried Lord’s parallels. The first, from the opening delivery of the over, was smacked over mid-wicket in a dismissive manner not dissimilar to the way he cleared the ropes off Jofra Archer in the infamous super over.

And the second, which saw a diving Jonny Bairstow’s knee hit the rope just before he offloaded to Liam Livingstone, carried more than an echo of Trent Boult stepping on the boundary when the 2019 final reached crunch time

But that was then and this is now. New Zealand have moved on from their Lord’s heartache, becoming ICC World Test champions in the meantime, and were determined to keep their ICC Men’s T20 World Cup dreams alive as they seek a remarkable double.

Neesham’s blitz made them favourites to do just that, with 23 coming from the pivotal 17th over before he launched Rashid over deep mid-wicket to continue the momentum.

That was his last meaningful act, as he picked out Eoin Morgan at cover off Rashid, but in Mitchell New Zealand had a set batter ready to pick up the mantle.

The 30-year-old has made up for lost time in his international career, having had to be patient for his opportunity, and did likewise here in a perfectly-paced knock.

Having lost the company of Martin Guptill and Kane Williamson early, he initially struggled to pierce the infield and sat on 38 from 33 deliveries.

The change of pace from then on was as effective as it was devastating, with his next 35 runs taking just 15 deliveries as he steered his side home in style.

Two sixes off Woakes settled any nerves in the penultimate over, which began with New Zealand needing 20 and ended with the job done.

Fittingly, it was Mitchell who hit the winning runs – with his father, former All Black John, watching on from the stands – and a comment in the aftermath summarised what has made this Black Caps team so popular as he looked ahead to the challenge that lies ahead in Sunday’s final.

“Whoever we’re taking on, we’ll have fun,” he said.

With New Zealand in this form, they won’t be the only ones.