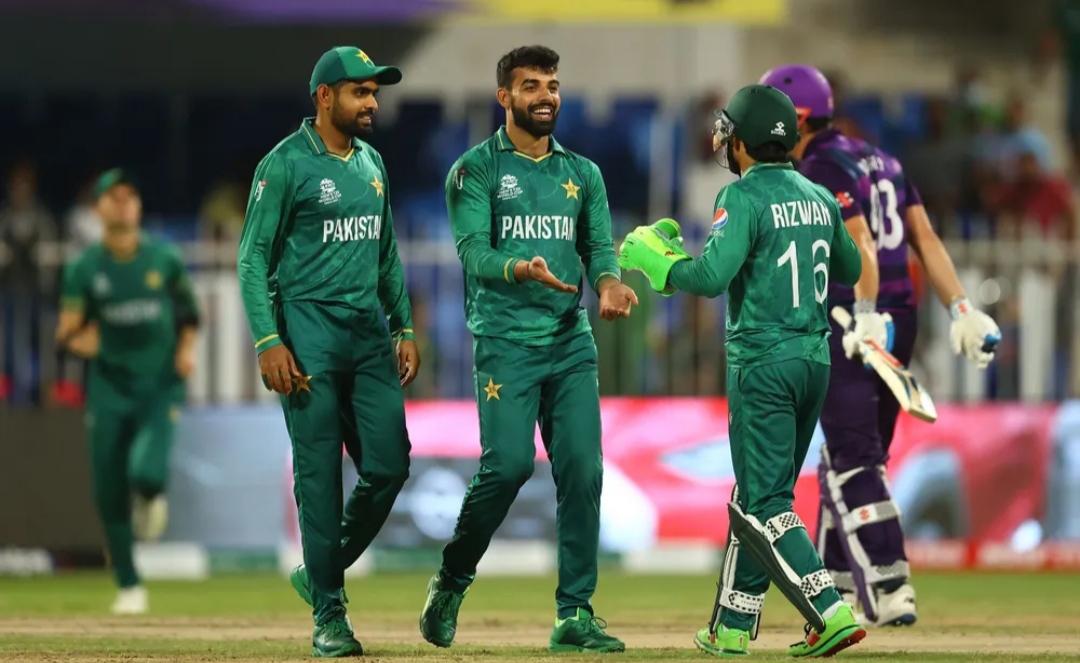 Sharjah, November 8: Skipper Babar Azam made 66 and Shoaib Malik clubbed an incredible 18-ball fifty as Pakistan posted 189 for four from their 20 overs, having chosen to bat.

Despite Richie Berrington’s defiant unbeaten 54, Scotland only managed 117 for six in reply as their campaign ended in defeat.

The most prolific batter in the Super 12s, Babar set about compiling his fifth half-century with consummate ease, starting with a sumptuous cover drive for four off Hamza Tahir.

Babar’s opening partnership with Mohammad Rizwan has yielded two century stands and the keeper-batter launched Brad Wheal for a massive six over cow corner in the fifth over.

It wasn’t the day for another big partnership however as Tahir tossed one up and drew an under-edge from Rizwan that was well held by Matt Cross, dismissing him for 15.

Babar was unperturbed and hit the roof of the Sharjah Cricket Stadium with a maximum from Mark Watt’s bowling.

But the 27-year-old star lost another partner as Fakhar Zaman holed out to cow corner for eight to continue his lean run of form and make it 59 for two.

Mohammad Hafeez came to the crease and acted as a foil to his captain, who continued to torment the Scottish attack, taking Watt for successive fours with power and poise.

Hafeez really hit his straps in the 15th over, sending Safyaan Sharif flying fully 97 metres over long-on, then back-to-back fours before being trapped LBW for an entertaining 31.

Watt has been Scotland’s key weapon with the ball but found his economy rate ruined further with a brutal bottom-handed six from Malik to kickstart his innings.

It was Watt’s spin twin, leg-spinner Chris Greaves, who had most joy and his control was rewarded with the big wicket of Babar, who picked out George Munsey at long on to depart for 66.

Malik took aim at Sharif and struck two further massive blows over midwicket and then down the arc to take the penultimate over for 17 runs.

Then Greaves bore the full brunt of the veteran batter, who hit the last four legal deliveries of the innings for three sixes and a four to bring up Pakistan’s fastest-ever T20I fifty.

The run chase always looked a tall order for Scotland, whose high score in the tournament was 165, and they made a steady if unspectacular start.

They reached 23 for none with George Munsey finding scoring easier than his captain Kyle Coetzer, who was clean bowled by Hasan Ali for nine in the sixth over.

Pakistan struck again when Imad Wasim palmed a low Munsey drive onto the stumps at the non-striker’s end to run Cross out for five.

And Shadab Khan broke the backbone of the Scotland batting order with two wickets in three balls midway through the innings.

Munsey departed on the first ball after drinks when he nicked to short third man and Dylan Budge was bowled for a third-ball duck to make it 41 for four.

Berrington dominated the scoring in a partnership of 46, to which Leask added 14 at a run-a-ball before being comprehensively bowled by Shaheen Shah Afridi for 14.

Berrington forged on and then smacked Hasan over long-on for six before bringing up an excellent fifty from 34 balls.

Haris Rauf got Greaves for four in the final over as Scotland finished their 20 overs on 117 for six, a full 72 runs short, with Berrington ending unbeaten on 54.

The semifinals will see Group 1 toppers England take on New Zealand in Abu Dhabi on 10 November while Group 2 toppers Pakistan will play Australia in Dubai on 11 November. The final will be played in Dubai on 14 November. The complete results and fixtures are available on the page here and the points table here