Abu Dhabi, November 2: A blistering spell from Kagiso Rabada set South Africa up for a convincing six-wicket victory over Bangladesh in Abu Dhabi.

Rabada took three wickets in his opening spell and Bangladesh never recovered as the Proteas kept their charge for a semi-final place on track at the ICC Men’s T20 World Cup 2021.

With this win, South Africa have three wins from four matches ahead of a clash with Group 1 leaders England, with Australia their most likely challengers in the battle for the last four.

Rabada finished with figures of three for 20, his best showing in T20 internationals, while Anrich Nortje took three for eight as Bangladesh were bundled out for just 84.

South Africa had no trouble chasing that down, with skipper Temba Bavuma leading from the front in making an unbeaten 31 to take his side home.

Bangladesh, deprived of the injured Shakib Al Hasan, chose to leave out Mustafizur Rahman and replace him with all-rounder Shamim Hossain.

At the top of the order Mohammad Naim and Liton Das made a promising start but in the fourth over, Rabada changed the complexion of the game. Naim pulled the bowler straight to midwicket to go for nine, and next ball he was followed back to the hutch by Soumya Sarkar, trapped in front by a searing inswinger.

Mushfiqur survived the hat-trick ball two overs later but did not trouble the scorers as he edged to slip and Reeza Hendricks held on after juggling the ball.

If it was not one South Africa quick, it was another causing the issues as Nortje had too much bounce for Mahmudullah who gloved the ball onto his shoulder and into the grateful arms of Aiden Markram at point, leaving Bangladesh in trouble at 34 for four.

Afif Hossain went next ball as he tried to charge Dwayne Pretorius and the ball clattered into the stumps off his pads.

Liton had been the only real resistance for Bangladesh but when Tabraiz Shamsi entered the fray, he finally removed the opener for 24.

Shamim and Mahedi Hasan stemmed the flow of wickets for a while, but eventually the former fell trying to attack Shamsi and picking out Keshav Maharaj in the deep.

The only area of the game where South Africa had been a little off their best was the ground fielding, but skipper Bavuma made up for that with some smart work to run out Taskin Ahmed.

Mahedi hit the first six of the innings but then perished as he tried to take on Nortje and simply lobbed the ball back to the bowler for 27. Nortje finished the innings off in style as Nasum Ahmed hit his own wicket backing off against the speed of the right-armer.

Bangladesh’s total was never likely to be enough, but Taskin got them off to a strong start with one that came back and trapped Hendricks for four in the first over.

Quinton de Kock was then flummoxed by a straight one from Mahedi before Markram edged to slip off Taskin as South Africa slipped to 33 for three.

However, Bavuma and Rassie van der Dussen came together to take South Africa to the brink, although the latter was brilliantly caught by Shoriful Islam off Nasum leaving David Miller to finish it off. 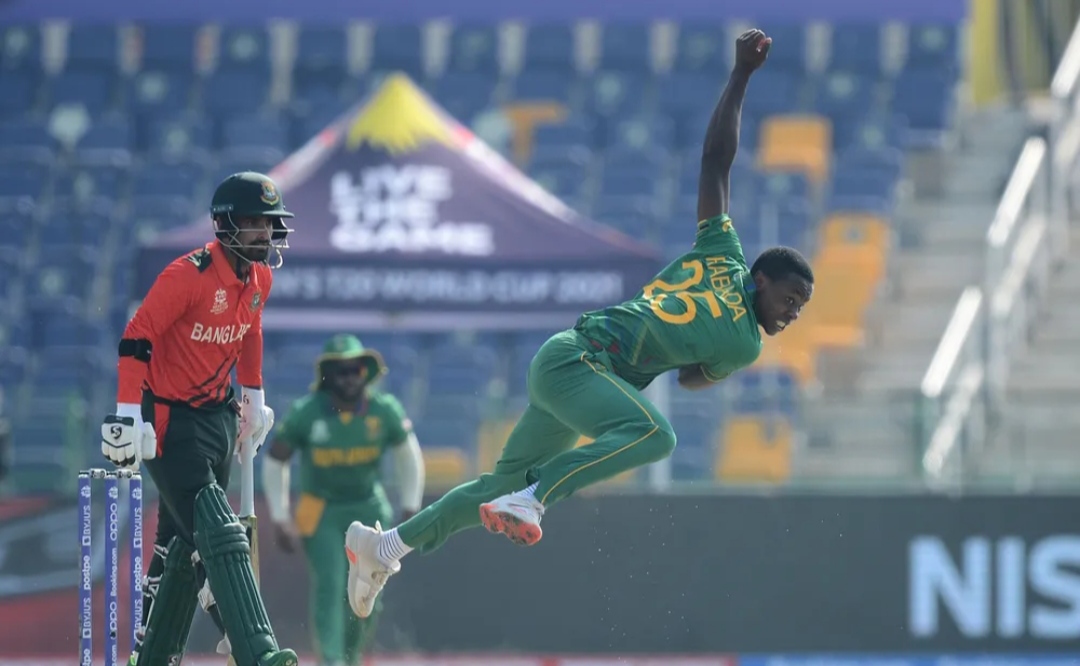