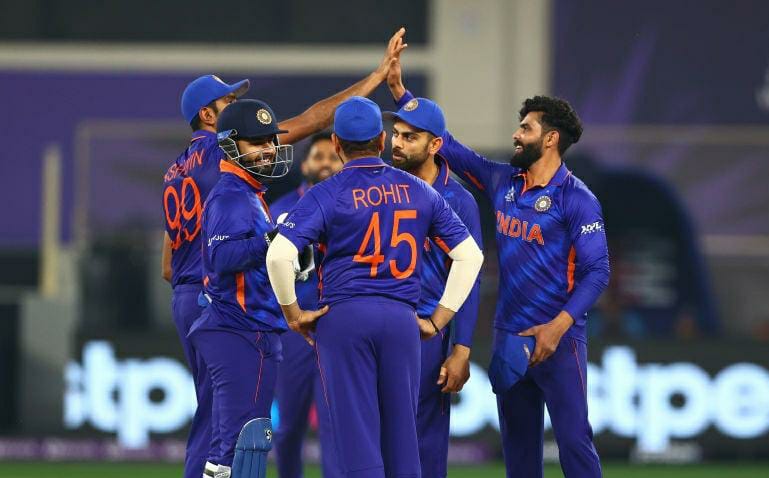 Dubai, November 5: India kept their hopes of reaching the semi-finals at the ICC Men’s T20 World Cup alive with a comprehensive eight-wicket triumph over Scotland at the Dubai International Stadium.

Knowing they had no margin for error after losing their first two Super 12 games against Pakistan and New Zealand, Virat Kohli’s men produced a superb bowling display to dismiss Scotland for 85.

Ravindra Jadeja and Mohammed Shami both finished with figures of three for 15 while Jasprit Bumrah (two for 10) and Ravichandran Ashwin (one for 29) also impressed with the ball.

KL Rahul and Rohit Sharma made easy work of the response, scoring 50 and 30 respectively before Suryakumar Yadav hit the winning runs as India reached their target with eight wickets and 81 balls to spare.

After calling the toss right for the first time in this tournament, birthday boy Kohli put Scotland in to bat knowing that chasing would be better for his side’s net run-rate in their bid to overhaul the Black Caps for second spot.

Scotland enjoyed a bright start to life at the crease though as George Munsey launched Bumrah for a huge six over the square-leg boundary off the final ball of the first over.

Munsey continued to play his shots against the returning Varun Chakravarthy, who came into the India side in place of Shardul Thakur, reverse sweeping the spinner for four in the next over.

Bumrah eventually made the first breakthrough in the third over, bowling Kyle Coetzer as the Scotland skipper looked to drive to leave his side at 13 for one in the early stages.

But Munsey continued to look comfortable at the other end, following up a watchful first few balls from Ashwin to strike a superb four that bisected extra-cover and mid-off.

Two further fours from the last two balls of the over via reverse sweeps took Munsey to 23 from 14 balls and saw Scotland finish their first four overs at the crease on 25 for one.

Varun restricted Scotland to just one run from the next over and with pressure mounting, India got their man in the fifth over as Munsey smashed Shami to Hardik Pandya for 24.

Having finished the powerplay on 27 for two, Scotland suffered another setback in the next over as Richie Berrington was bowled without scoring by Jadeja.

It went from bad to worse in the final ball of Jadeja’s first over, with Matt Cross following Berrington back to the changing room after being struck lbw on his back pad.

Scotland stopped the bleeding in the next over with Calum MacLeod and Michael Leask at the crease but they could only add three runs to take the score to 32 for four.

Leask provided a response in the 11th over, pulling a short ball from Shami for six despite hitting the top edge of the bat before drilling the next ball for four straight down the ground.

But Leask’s resistance was ended in the very next over, becoming Jadeja’s third victim after being hit lbw while attempting to sweep through midwicket as he departed for 21 from 12 balls.

Scotland were now well and truly on the back foot and following just one run off Bumrah in the 13th over, Chris Greaves lost his wicket to Ashwin after skewing the ball to Pandya.

Mark Watt joined MacLeod in the middle and a misfield from Shami allowed him to find the boundary in the 15th over before edging Ashwin for another four in the next.

Shami made up for his error with the ball in hand however, taking two wickets as he sent MacLeod (16) and Alasdair Evans packing either side of Safyaan Sharif being run out.

Bumrah wrapped up the innings in the 18th over, beating the bat of Mark Watt (14) to take his leg stump on the half-volley as Scotland were left stranded on 85 all out.

Sharma and Rahul set about their task intent from the off, with the former hitting Watt for four in the first over before the latter found the boundary three times against Brad Wheal in the next over.

Rahul added another four from the first ball of new bowler Evans before nonchalantly clipping the next ball for six as India reached 39 without loss through three overs.

Sharma took the attack to Sharif with a six and two fours to bring up the fastest team 50 of the tournament to date while Wheal was also punished before taking the wicket of Sharma.

That did little to stem the tide though, with Rahul hitting Watt for six over the long leg boundary before bringing up his half-century from 18 balls.

Rahul was unable to see his side home, losing his wicket to Watt off the final ball of the same over, but Yadav hit Greaves for six to secure victory in style from just 6.3 overs.

Player of the Match: Ravindra Jadeja