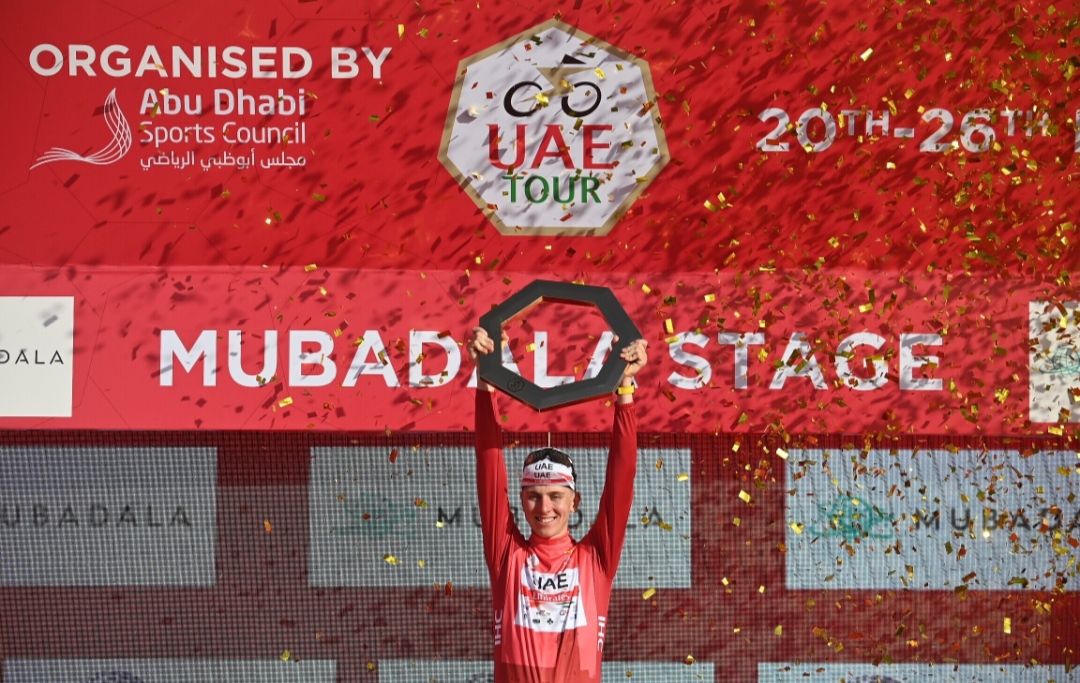 Jebel Hafeet, 26 February 2022: Tadej Pogacar won the iconic Jebel Hafeet stage for the third year in a row and the UAE Tour 2022 , organised by Abu Dhabi Sports Council, for the second time running. Already the race leader before Stage 7, the Mubadala Stage, he kept rival Adam Yates (second overall) on a leash and took the command in the final kilometer to sprint to victory, making him the undisputed winner of the fourth edition of the race. Third on the line, Spain’s Pello Bilbao also moved onto to the final podium while Jasper Philipsen claimed the Green Jersey of the points competition and Dmitrii Strakhov took the Black Jersey of the intermediate sprints at the end of a great week of racing throughout the United Arab Emirates.

Speaking seconds after the stage finish Tadej Pogacar, winner of the fourth edition of the UAE Tour said, “I’m super happy to take a win at Jebel Hafeet for a third time. It suits me well. We were riding for the stage win today, Joao [Almeida] tried to attack to steal the win but Adam [Yates] was very strong and covered it. Then we switched focus to the sprint. At one moment I was really suffering but luckily Adam slowed down too. Winning the UAE Tour was a really big goal for the team. I’m super proud and very happy, thanks to everyone for their support.”

Runner up Adam Yates said: “Big thanks to all the guys. Today was the last mountain stage and we put a lot of effort into it. We’ve been working hard and well as a team all week, not just for GC but for the sprints too. I’ve really enjoyed being a part of it. Today we came up short but not through any lack of effort. On the first attack I went full gas until I couldn’t go any more. I had a look behind and was hoping [Pogacar] wasn’t there – but it’s pretty hard to drop a double Tour de France winner. I tried again right at the end and I still couldn’t get rid of him. On a finish like this he’s pretty quick in a sprint. All in all I think we can be happy with how we’ve raced – there’s plenty to build on. Luke (Plapp) is a young guy but you can see how strong he is. He’s got real potential and you can see how motivated he is. I’m sure he’s got a big future ahead of him.”

Third in the GC Pello Bilbao said: “It’s a great pleasure to make the podium of the UAE Tour with those two greats of cycling. It was a surprise for me to come here. I was told to come, just one week beforehand. I had done it twice previously but not at my best. The third time has been the good one. I’ve been here with very young teammates and the way they rode for me today was like they had been doing it for ages. I’m super proud of this team.”

Green Jersey winner Jasper Philipsen said: “We got a teammate in the breakaway so it was the best situation for us in the defence of the green jersey. Then for me it was all about finishing well and doing some extra kilometres of training for the next part of the season that will include Paris-Nice and the classics. We can be very happy with two stage wins and the green jersey. We’ve had a great week of racing here in the UAE.”