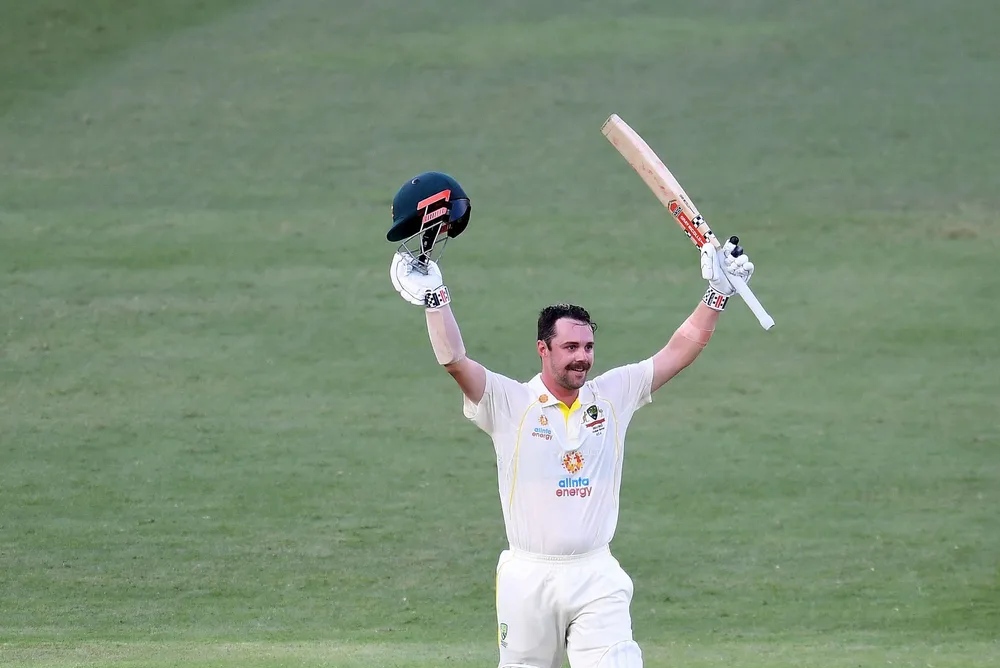 Brisbane, December 9: A 156 run partnership from David Warner and Marnus Labuschagne and a Travis Head century has pushed Australia into a commanding position on day two of the first Ashes Test in Brisbane.

Following the rain at the backend of day one, Australia began their innings at the start of day two, with the first session prolonged by half an hour. Looking to make early inroads, England struck through Ollie Robinson, with the tall quick removing Marcus Harris for three.

After a lean run against England on the 2019 tour, there was an air of déjà vu to Harris’ dismissal, with Robinson finding a hint of seam movement, and drawing an outside edge to Dawid Malan in the slip cordon.

Marcus Labuschagne joined David Warner and prevented an early double blow, seeing off his first eight deliveries before opening his account with a boundary through the gully region. Three balls later, Labuschagne doubled the dose with a drive down the ground.

Ben Stokes took over from Mark Wood, and looked to have removed Warner with a peach, disturbing the left-hander’s off stump. Stokes was subdued in his celebration, and his intuitions proved true, as he had overstepped for a no-ball.

Warner made the most of the reprieve, moving into the thirties, when Joe Root turned to the spin of Jack Leach to break the 51-run stand.

Leach’s first over went for a solitary run, though the batting pair liked what they saw, exploding with a glut of boundaries.

Warner whacked two sixes in the space of three balls down the ground, and in the finger-spinner’s next over, Labuschagne joined in with one of his own over mid-on.

Leach was taken out of the attack, though the Aussie onslaught continued, as the pair in the middle ticked over a one-hundred run partnership. Labuschagne passed fifty before lunch, with his partner reaching the mark after the break, and after a second life, when Rory Burns dropped him behind the wicket.

Australia’s pair continued, moving past England’s score halfway through the second session, though Leach hit back to break the stand, undoing Labuschagne with extra bounce off the Gabba surface.

Steve Smith opened his account with a mistimed whip through mid-on, continuing the team’s attack of Leach, who despite the wicket was given no time to find rhythm at the bowling crease. Even with the wicket, Leach’s economy was still close to eight an over.

As the day progressed though, England started to play their way back. Smith edged to ‘keeper Jos Buttler for a dozen off the bowling of Mark Wood who was justly rewarded for being one of England’s best, and Warner, struggling to find a rhythm after tea, met his end. Misjudging a fuller Robinson delivery, the left-hander, caught in two minds, popped a catch to Ben Stokes. Warner departed for 94 – just the second time Warner has been dismissed in the nineties in Test cricket.

With his tail up, Robinson struck again with his very next ball, hitting the top of Cameron Green’s off-stump as the No.6 shouldered arms. Alex Carey, in his debut innings, negotiated the hat-trick ball. With wickets tumbling at the other end, Carey, making his debut, did well to bide his time.

The two batters put on a quick 41-run partnership in 55 balls, with Head once again doing the bulk of the scoring. He smashed Ben Stokes for three boundaries in an over and deposited Joe Root into the stands.

Carey soon departed for 12, mistiming a pull straight into the hands of Ollie Pope, giving Chris Woakes his first wicket of the game.

Joined by skipper Pat Cummins at the crease, Head continued to bat with intent and put the pressure back on England after the wicket. He brought up a run-a-ball half-century in style by swatting Wood to the boundary.

Jack Leach took the brunt of the punishment after Head reached the milestone as the Aussie duo at the crease accumulated 25 runs in the next two overs of the left-arm spinner.

With Leach leaking runs at an economy rate of close to 9, Root decided to bring himself on to bowl and the move paid immediate dividends as Cummins was caught at leg slip trying to guide the ball on the pads to the fine leg region.

Head continued to punish the loose deliveries and soon brought up his third Test century in just 85 balls. Head needed just 34 deliveries to get to his second milestone of the day, becoming the first batter to score a hundred at the Gabba in a single session of men’s Tests.

Mitchell Starc and Head took Australia safely to stumps at 343/7, with a massive lead of 196.