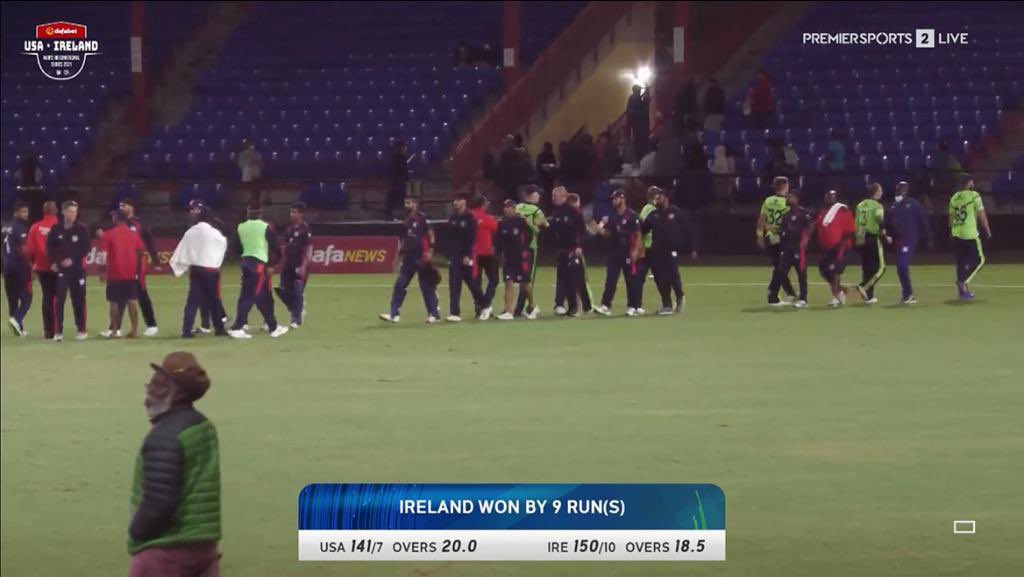 Dubai, December 24: Ireland have avoided T20I series defeat with a nine-run victory over the USA in Lauderhill.

Setting the hosts 151 for victory thanks to a lone hand from Lorcan Tucker, Ireland turned the screws with a strong bowling performance, headlined by a calm final over from the experienced Mark Adair.

In a change from the opening match of the series where they won by 26 runs, USA skipper Monank Patel opted to bowl first in Lauderhill, bringing Vatsal Vaghela into debut in place of Xavier Marshall.

Going into the second match with an unchanged line-up from their first-up defeat, captain Andrew Balbirnie walked out with Paul Stirling, though lost his partner by the end of the first over. Opting for the spin of Nisarg Patel in the opening over, Monank’s plan delivered immediate dividends, with Stirling adjudged lbw for 5.

Backing up his 57* from 49 balls in the first match, Lorcan Tucker looked in imperious form, hitting his first ball for a boundary off left-armer Saurabh Netravalkar. Captain Balbirnie looked in good touch with two early boundaries of his own, only to pick out Sushant Modani at deep backward square-leg.

Tucker and Curtis Campher countered during the Powerplay, moving the Irish to 59/2, though the work was undone in the first ball of the seventh over, with Campher miscuing a slog to Marty Kain at long-on for 17 (11).

Tucker continued in his push despite the loss of partners at the other moving to 50 from just 32 balls despite the loss of Shane Getkate (5) and Neil Rock in the 12th over for four, finding Ritwik Behera in a soft dismissal. Vaghela claimed both victims to finish with an impressive 2/16 (3) in his first taste of international cricket.

Kain was busy in the outfield for the hosts, taking an incredible catch to remove Will McClintock for 1. Attempting to slog Nisarg Patel over the mid-wicket boundary, McClintock’s mistimed shot looked to have fallen to safety, only for Kain to run forward thirty metres before holding on while sliding low to the ground.

Tucker continued a near single-handed batting effort, moving into the seventies with a six off American spearhead Ali Khan. He proceeded to hit the quick for another two boundaries after losing Barry McCarthy (0) to an athletic run out from behind the stumps, and was ultimately the last wicket to fall on the penultimate ball of the 19th over for 84 (56). The tourists finished on an even 150, ruing the wasted seven deliveries.

USA begun their chase emphatically through left-hander Ryan Scott, slapping boundaries off consecutive balls of the opening over. Moving the score to 19/0 inside the first two overs, the USA looked to have taken an early hold of the match, only for Scott to be run out by Curtis Campher for 11.

The wicket of Scott halted the hosts, scoring just seven runs from the next two overs. The lack of runs heaped pressure on Ritwik Behera and Monank Patel, eventually leading to the wicket of Behera for a 23-ball 16. Monank was joined by match one hero Gajanand Singh, though could only add 28 between themselves by the time Monank was dismissed by Ben White for 26. Singh fell to Curtis Campher lbw for 22 (20), and the required rate continued to lift.

Needing a rate of more than 11 an over, Sushant Modani put the foot down with two sixes and a four, though became Campher’s second of four victims, with the quick finishing with 4/25 (4).

Campher claimed Kain (11) straight after Modani, as well as Yasir Mohammad for a duck in the match’s 18th over, moving the hosts out of favouritism and needing 28 off the final two overs.

Nisarg Patel and Netravalkar found 11 runs in the penultimate over, though 17 off the final six balls was a bridge too far. Adair was cool for Ireland, beginning with a dot ball, and held his nerve despite conceding a boundary, bowling consecutive dot balls to brush the hosts aside.