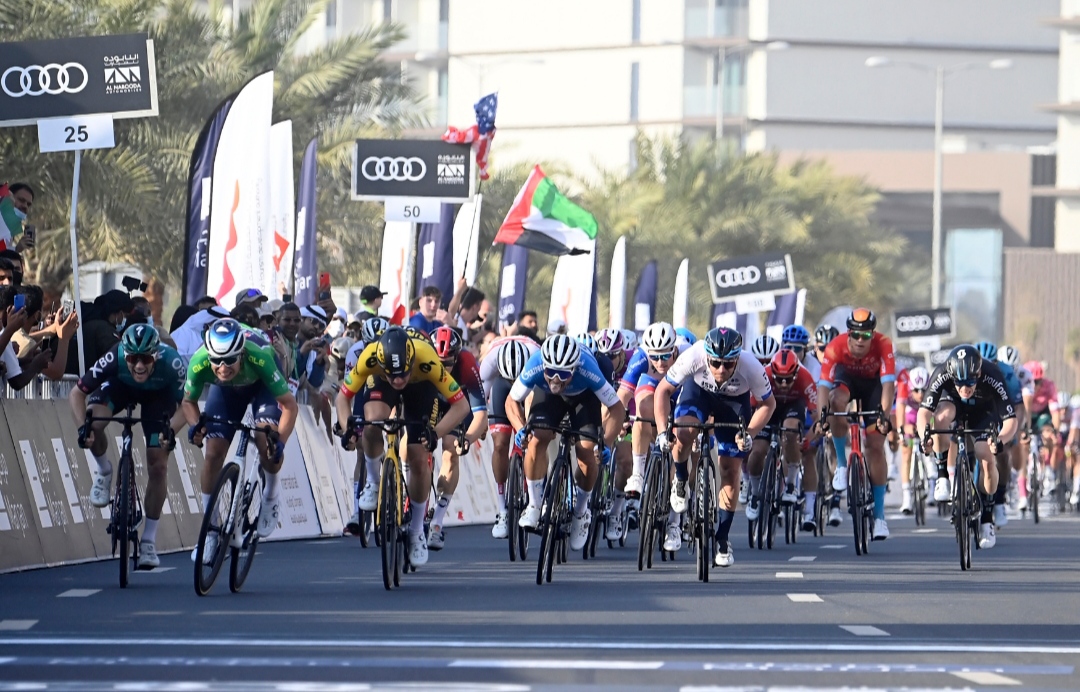 Unlike runner-up in the GC Filippo Ganna and challenger Adam Yates, both riding for Ineos Grenadiers, Tadej Pogacar made the front group during the echelons and sprinted to second place, therefore extending his lead in the overall ranking by two seconds. Alexandr Vlasov, third, gained one second as well. With 6.5km to go, the Slovenian had a flat tyre but he didn’t panic. His teammates Mikkel Bjerg, Rafal Majka and Max Richeze brought him back to the pack. He is now four seconds ahead of Ganna on GC ahead of the Expo 2020 Dubai Stage in Dubai.

Today’s stage started from Ras Al Khaimah Corniche in Ras Al Khaimah, an oasis of beauty and boasts more nature offerings than any other emirate. It is home to cloud-piercing mountains, watery mangroves, rosy-red deserts and almost endless beaches interspersed with bustling creeks and pretty lagoons. The rich Ras Al Khaimah culture extends over seven millennia and embraces colourful Bedouin and Emirati traditions.
Ras Al Khaimah has become one of the most sought-after destinations in the Middle East. Locally, it is fondly known as the Pearl of the Emirates and is internationally renowned for its inspiring history and nature. Travellers to Ras Al Khaimah can choose from serene-spa-luxury to knee-trembling-adrenaline-adventures and anything in between.

Jasper Philipsen said in the press conference: “I’m never confident before a race, I only get confident when I cross the finish line and win. The finish line was close to our hotel so we had time to look at it carefully this morning. We did a very good job even though [lead-out man] Jonas [Rickaert] lost his chain. We had to adapt to the situation. Everything went well and I’m super happy to take a second stage win. Tomorrow is another chance to go for a bunch sprint. I’m targeting the wins rather than the points classification.”

Tadej Pogacar said: “I think I hit the road on a sharp corner and that’s how I got a flat tyre. At first, it went slow and suddenly it was totally flat and I had to change bike. Why should I have become stressed out? There was nothing I could do about it. I knew the team was strong enough to bring me back. If Max [Richeze] had not helped me to come across to the bunch, maybe he could have brought Pascal [Ackermann] closer to the finish line. Unfortunately, my incident left Pascal almost alone at the end but when something like this happens, we have to adapt to the situation.”