Taking full advantage of generous, if grim-faced, support from his team-mate Kimi Raikkonen, who led from pole position until the pit-stops, the four-time champion came home 3.1 seconds clear of the Finn in glorious Mediterranean sunshine with Hamilton finishing seventh for Mercedes after starting 13th. 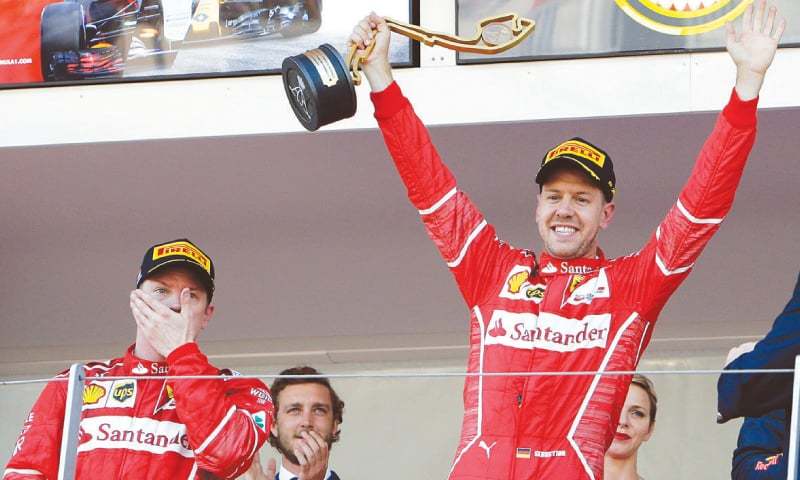 Vettel’s success was Ferrari’s first in the principality in 16 years since seven-time champion Michael Schumacher triumphed in 2001.

It was the 82nd one-two in the team’s history and celebrated noisily by the tifosi who had thronged into the circuit overnight.

It was also the 29-year-old German’s second Monaco triumph, his third win this year and the 45th of his career, lifting him to 129 points after six rounds of this year’s 20-race championship ahead of Hamilton on 104.

The German celebrated as jubilantly, whooping over the radio and beaming from the podium as mechanics sang the Italian national anthem.

As with Schumacher in his pomp there was also a distinct whiff of ‘team orders’, with Raikkonen pitting first and Vettel staying out for a further five laps in a move that worked in his favour.

Raikkonen looked far from happy on the podium, staring fixedly ahead and taking gulps of the Champagne as Vettel sprayed his.

Raikkonen started from pole position for the first time in nine years, with Vettel joining him on the front row.

Both made a clean start, with Vettel holding off Bottas heading into the first corner.

After Raikkonen and Bottas had come in for a tire change a few laps earlier, Vettel changed halfway through the 78-lap race.

When he came back out, Vettel was in front of Raikkonen while Ricciardo second here last year had jumped ahead of Bottas.

It seemed to be a case of the Ferrari team giving preferential treatment to Vettel, because it looked like Raikkonen came in too early.

Australian Daniel Ricciardo, who was unlucky not to win last year, finished third for Red Bull, despite hitting the barrier at Ste Devote, ahead of Valtteri Bottas of Mercedes and Dutch teenager Max Verstappen in the second Red Bull.

Carlos Sainz was a well-judged sixth for Toro Rosso ahead of Hamilton and Frenchman Romain Grosjean of Haas.

Briton Jenson Button, back for one race to replace two-time champion Fernando Alonso, racing at the Indianapolis 500 later Sunday, retired his McLaren after a collision with Pascal Wehrlein’s Sauber.

The crash left Wehrlein’s car on its side at Portier, but he was unhurt in the crash, which required a Safety Car intervention for six laps in the closing stages.

Renault’s Nico Hulkenberg was the first to retire, pulling over at the tunnel entrance with smoke coming out of the rear of his Renault on lap 16.