Jammu, February 08: A group of players Monday alleged ‘second-class citizen treatment’ by Jammu and Kashmir Cricket Association (JKCA) in the ongoing Vijay Hazare Trophy trials, here, however, the selector refuted the claims, saying ‘everyone will get equal opportunity’.

They said while some players are being treated well, they are not given equal opportunities in the trial camp.

“That was okay somehow but when yesterday four teams were created, we felt something was cooking. Because the players who seem to be favourites were put in teams whose match was scheduled at GGM Science College Ground, where the wicket is good. While we were told to play at the murky wicket of M.A Stadium,” he added.

When the players this morning reached to play the trial match at M.A Stadium, they were surprised as the ‘pitch was not prepared for the game’.

“On entering the ground, we came to know that the pitch is yet to be prepared. We waited. But after a long wait, the pitch was still murky and there was a problem with the sight screen. We were told to play but we refused because one of the selectors said, “if even someone takes 5 wickets, it  won’t count,” by looking at the pitch,” another player alleged.

“We are really being treated as second-class citizens. It seems they are just completing formalities. We should be given equal opportunities at least in trial matches,” he added.

The players also haven’t been provided accommodation by JKCA, which is adding to their woes,

“If they are not taking us seriously in trials, then they should let us know, we will leave because they haven’t provided us accommodation either. We can’t afford this much for nothing,” he said.

However, the selector contested these claims.

“I was myself there at sharp 9 and when we saw the wicket was not good, we decided not to hold the match at M.A Stadium. Now their match will be tomorrow play at A ground (GGM Science College),” Ashender Kaul, one of the selectors, claimed.

“When you have two grounds, some play at one and some at other,” he added.

When asked about the murky wicket at M.A Stadium, the selector responded,

“We had prepared both grounds, however, one hadn’t dried and there was some problem with the sight screen. That’s the reason. Now, tomorrow, ‘E’ and ‘F’ teams will play at M.A Stadium while ‘C’ and ‘D’ will play at GGM College ground.”

“Those who do well will get noticed. This process is equal for all; none is special to us. But the thing is when someone is your number one batsman, he has to be given priority and not directed to play everywhere,” he concluded. 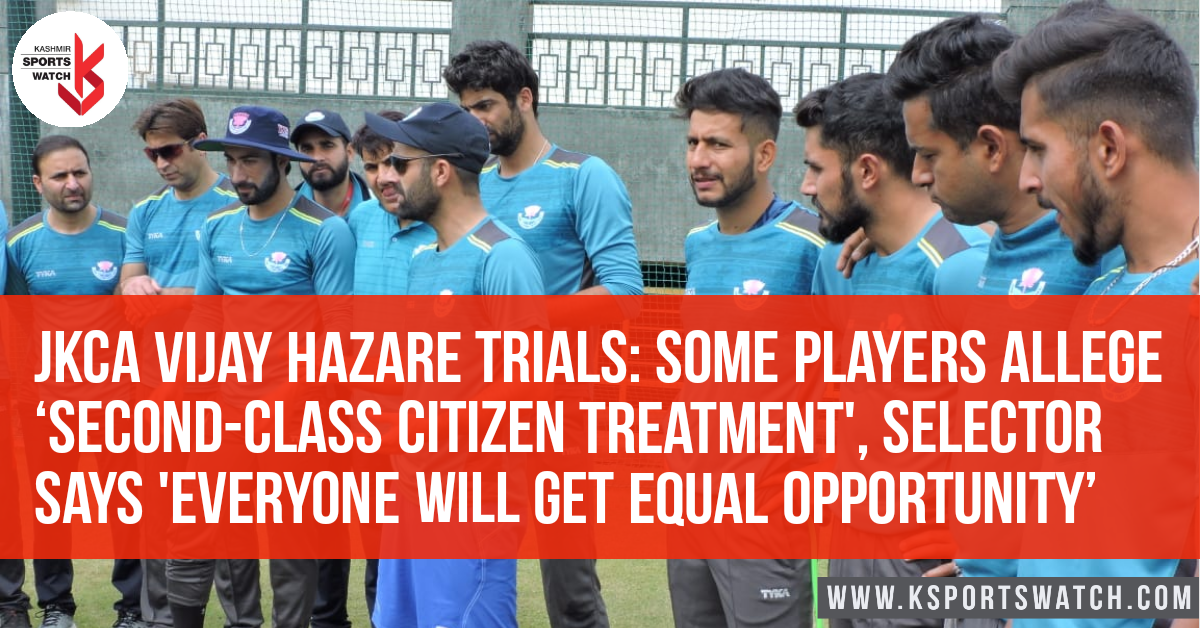