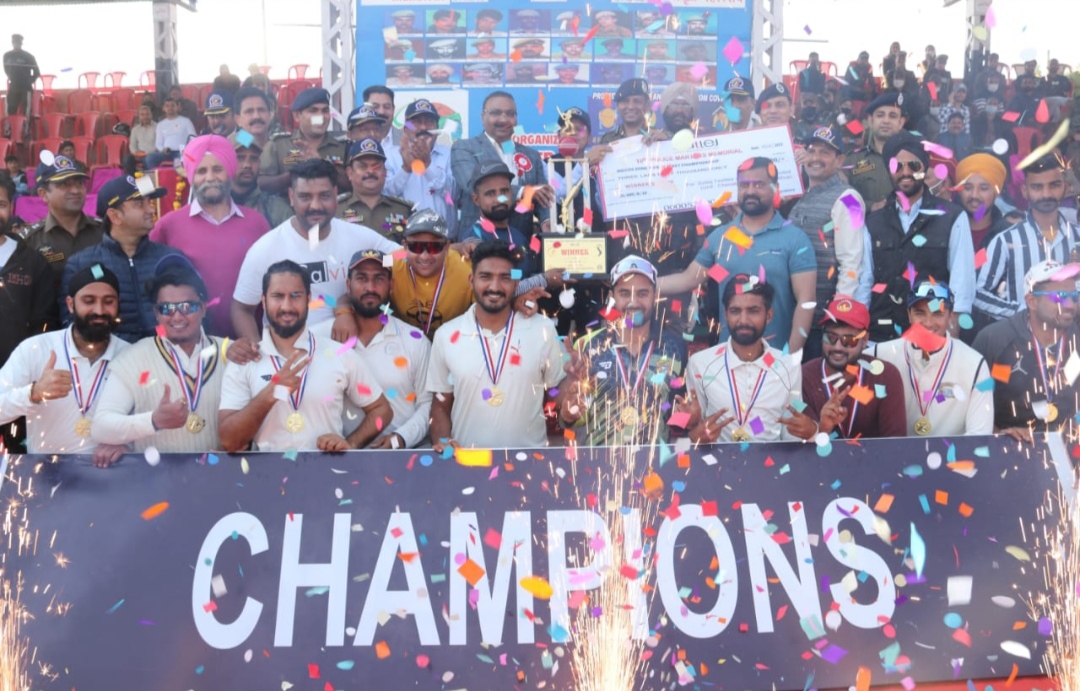 Jammu, March 8: The cricket tournament in Kathua has become a big event and a medium to remember all the fallen heroes of J&K Police who sacrificed their lives for the sovereignty and integrity of the nation and provides an opportunity to celebrate life, health and sports. This was stated by the Director General of Police J&K Dilbag Singh at the closing ceremony of 10th edition of Police Martyrs Memorial Cricket Tournament at Kathua Sports Stadium today afternoon.

Immediately after his arrival, the DGP accompanied by ADGP Jammu Mukesh Singh laid floral wreaths in the martyrs’ gallery and lit the lamp to pay homage to the brave martyrs. Other dignitaries and families of martyrs and citizens also paid floral tributes to the martyrs on the occasion. Later DGP J&K led the officers and dignitaries to observe silence in memory of the martyrs.

Speaking on the occasion the DGP said that by organizing such events we remember the sacrifices of our martyrs and these events provide an opportunity to celebrate life, good health and sports. He appreciated the efforts of members of Shaheed Welfare Committee Kathua who he said are always very keen and particular in organising the event and making it more popular and famous each passing year. The Cricket tournament in Kathua has become a huge event and a medium to remember all those fallen heroes of J&K Police who sacrificed their lives for the sovereignty and integrity of the nation, the DGP said. On behalf of Police parivar and general public the DGP expressed his gratitude towards the families of martyrs and said the nation and the department will always remain indebted for the sacrifices made by their loved ones. He assured them that the martyrs will always be remembered by the nation and by the department.

The DGP said that the youth should take part in different sports activities to stay fit and healthy and advised them to stay away from drugs as it destroys not only the addict but the family, society and nation as a whole. He congratulated the winners of the 10th edition of the tournament Vicky 11 Pathankot team and also congratulated the runner up Lal Bahadur Shastri Delhi team. He said that winning and losing is part of the game.

The DGP appreciated the people of Kathua district who have always remained active and positive in facilitating and supporting different sports activities. He congratulated the district SSP and his team and other organizers for making this tournament eventful.

ADGP Jammu Mukesh Singh in his address said that the martyrs cricket tournament is one of the biggest tournaments organised in Jammu and Kashmir. He thanked the DGP J&K for providing funds and support for organizing these tournaments and other sports activities. He said that such events provide a platform to the youth to channelize their energy in a positive direction. He congratulated the participating teams, sponsors and people of Kathua for making the event a grand success.

Pertinent to mention that the 10th edition of Police Martyrs Memorial Tournament league matches was inaugurated by the DGP J&K on 19th December 2021. During the tournament 31 matches that included league, quarter final, semi final and final matches were played.