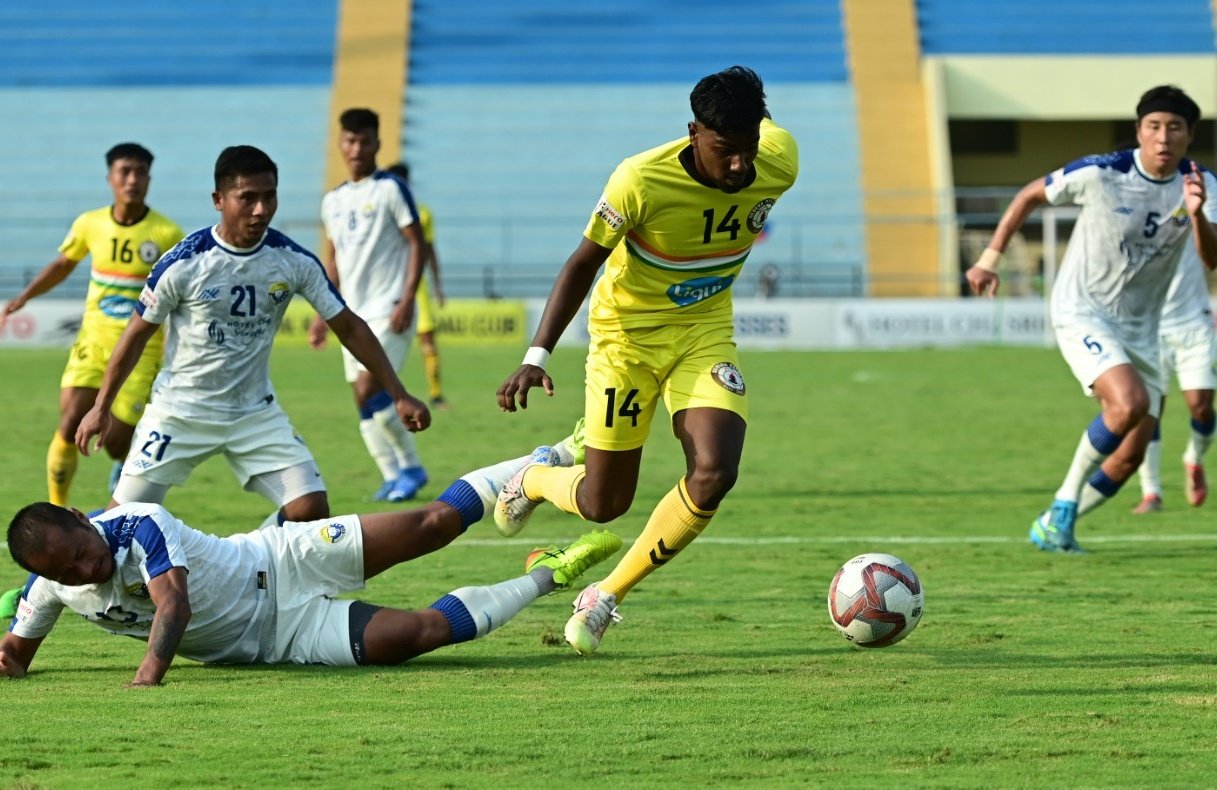 Naihati, March 30: Real Kashmir FC and Sudeva Delhi FC played out a thrilling 2 – 2 draw in match 46 of the Hero I-League 2021-22 campaign in Naihati on Tuesday. A first half brace from Tiago Adan gave Real Kashmir a two goal lead to carry at the break, but an inspired second half fight back saw Sudeva Delhi take away a point from the contest thanks to goals from Sreyas V.G. and Seithenlang Lotjem.

Real Kashmir got off to a fantastic start by taking the lead through Brazilian frontman Tiago Adan as early as the 2nd minute. With the ball in his possession on the edge of the Sudeva Delhi box, Pratesh Shirodkar shaped to shoot at first, but ended up playing a delightfully weighted clipped pass for Tiago Adan. Adan made a clever run in space behind the Sudeva Delhi defence and calmly slotted the ball into the far corner with his first touch. Goalkeeper Sachin Jha got a touch on the ball, but it wasn’t enough to stop his side falling behind in the early exchanges.

The side from the capital made a steady recovery despite the early setback, seeing plenty of the ball in the opposition half, albeit without a clear look at goal.

Sudeva Delhi had another scare in the 23rd minute when Tiago Adan’s mishit cross from the left came back off the woodwork, bamboozling Sachin Jha in goal.

If his previous effort left room for interpretation, there was no doubting Tiago Adan this time around, as the Brazilian got his second goal of the match in the 39th minute. After his initial through pass was blocked, the ball ricocheted back into the path of Adan, who produced an instinctive snapshot from 20 yards that beat Sachin Jha all ends up and curled beautifully inside the far post.

Sudeva Delhi would have been disappointed not to carve out any goal scoring chances of note in the first half, despite monopolizing possession to the tune of 81% in the first period. However, coach Mehrajuddin Wadoo freshened things up for the second half, making a number of changes in personnel in order to find a way back into the game.

The renewed vigour paid dividends in the 51st minute, as substitute Sreyas pulled one goal back for Sudeva Delhi FC. Sreyas was played through inside the box, but defender Lalchhawnkima was first to reach the loose ball. The ball could have been easily cleared away from the danger area, but Sreyas stuck to his task and out-muscled the defender to bear down on goal and send a low and hard finish past Niraj Kumar in the Real Kashmir goal.

The game continued along the same pattern in the second half, with Sudeva Delhi holding plenty of ball possession, and the Snow Leopards defending resolutely to keep their slender lead intact.

As the contest boiled down to the final minutes, Sudeva Delhi’s perseverance earned them a well deserved equaliser in the 91st minute. With a set piece opportunity, Abhijit Sarkar delivered a flat and bending cross into the front post, which was nodded on towards the far post with an expertly taken header by Seithenlang Lotjem. The two substitutes combined to snatch a late equaliser for Sudeva Delhi and end the contest with nothing to separate the two sides.