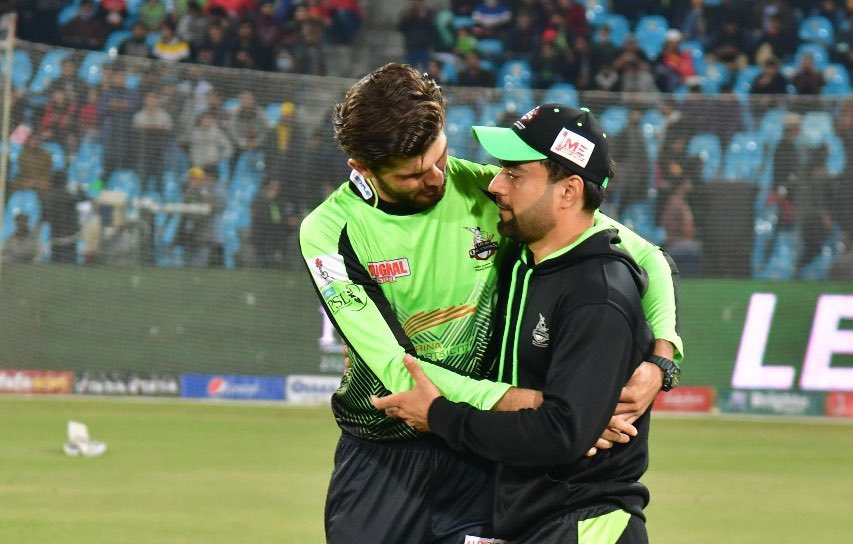 Srinagar, Febuary 21: Afghanistan star cricketer Rashid Khan has said that he is ready to play for Pakistan Super Star side Lahore Qalandars even in lowest category.

Rashid Khan who had to leave PSL 2022 midway due to National side commitment against Bangladesh.

Before leaving PSL 2022 , a video of Rashid Khan speaking with his Lahore Qalandarshas surfaced in which he is seen saying that he is ready to play for Lahore Qalandars even in lowest category.

Rashid is a Platinum Category player but his love for Qalandars is infinite.

Rashid is confident that Qalandars will continue to play with the same spirits and lift the trophy under the leadership of Shaheen Shah Afridi.

“I wish you guys all the very best, I will be watching you guys from Bangladesh and I can’t wait for this new captain [Shaheen] lifting the trophy,” he added

Rashid was star performer for Qalandars throughout PSL 7 campaign. He bowled with an economy rate of 6.25, bagging 13 wickets in nine games. The star player also scored crucial runs at the back end in a few matches.

Rashid also received a guard of honour from his teammates after his last match against Islamabad United where he bagged figures of 2/14.

Rashid Khan also tweeted before leaving PSL and said, “I don’t know the right words to say but all I can is to simply say THANK YOU! @lahoreqalandars @iShaheenAfridi @sameenrana @thePSLt20 it was such a great experience.Honestly it’s hard to leave such a lovely environment I would’ve loved to play remaining games but National duty Afghanistan”.