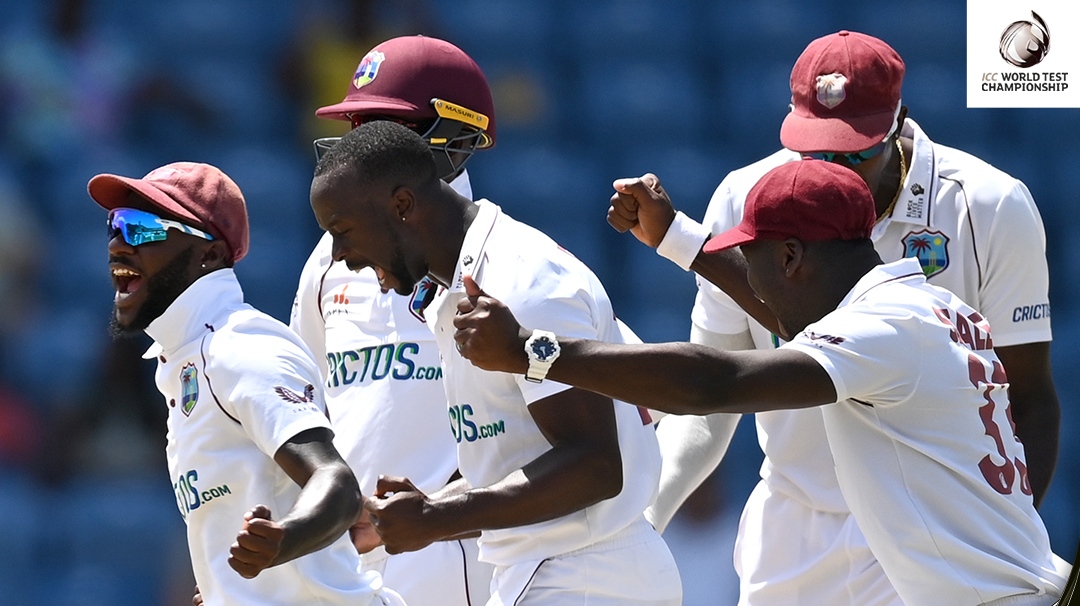 Grenada, March 27: West Indies completed a ten-wicket win on the fourth day of the third Test in Grenada to secure a series win over England.

And England added just 17 to their overnight score of 103/8, leaving West Indies with a simple task to bat out for victory.

Openers Kraigg Brathwaite and John Campbell reached the target of 28 with the minimum of fuss to record a famous victory, securing a series win and sending the West Indies up the World Test Championship Standings.

Play had resumed with Jack Leach and Chris Woakes at the crease, but a dire situation became even worse for England when Woakes was sent packing for 19 early in the day thanks to a stunning catch by Jason Holder.

Woakes made a pretty decent connection with a flick into the leg-side off Kemar Roach’s first ball of the day, but hadn’t accounted for the reach of the totemic Holder, who stretched out a long arm to take a blinder of a catch at gully.

England’s hopes of scrambling to a theoretically defendable total looked dead in the water, and the innings was soon wrapped up when Roach struck again, luring an edge from Leach (4) to end his 55-ball stay at the crease.

Roach’s double strike meant he ended the innings with figures of 2/10 from 9.2 overs. But as impressive as those numbers were, they were distinctly second-best to those of Mayers, whose five-for on Saturday saw him close with 5/18 from 17 overs.

Facing a minuscule target of 28 to win the match and series, the West Indies openers stroked four boundaries as they reached the winning total in just under five overs off the bowling of Woakes and Saqib Mahmood.

The win for West Indies means they are unbeaten against England in the last four series on home ground, with England’s victory in 2004 their only series win in Caribbean conditions since 1968.

Da Silva was named Player of the Match thanks to his remarkable and match-defining century in the West Indies’ first innings.

And captain Brathwaite was named as Player of the Series after his record-breaking 160 in the second Test and two further half-centuries in the series, with 341 runs to his name across the three Tests at an average of 85.25.

“It’s easy to be happy with a series win and relax but I don’t think we can relax,” Brathwaite said after lifting the Richards-Botham trophy. “The guys have got to stay hungry.

“We learned a lot from this series. Yesterday was really a remarkable day for us, to show the fight, the attitude we had from the get-go, it’s key to carry that forward. We’ve got to continue, we can’t take it for granted.”

Victory for West Indies sends them above Bangladesh in the World Test Championship Standings, while England remain at the foot of the table after a seventh defeat in 12 matches.

The series loss also raised questions over the future of England captain Joe Root in his role leading the side, but the skipper’s immediate response was to say that he hopes he can continue.

“I’m very passionate about trying to take this team forward,” Root said. “I will control what I can control.

“I don’t think it’s ever in your hands completely, is it? But I feel like the group are very much behind me, we’re doing a lot of good things and we just need to turn that into results.”

England and Root will turn their Test focus towards the English summer, which will see them host a three-Test series against both New Zealand and South Africa as well as the rescheduled fifth Test against India.