“Whatever he does on field, we want to stand beside him”: Rohit Sharma on Umran Malik

Cricket“Whatever he does on field, we want to stand beside him”: Rohit Sharma on Umran Malik
Facebook
Twitter
WhatsApp
Copy URL 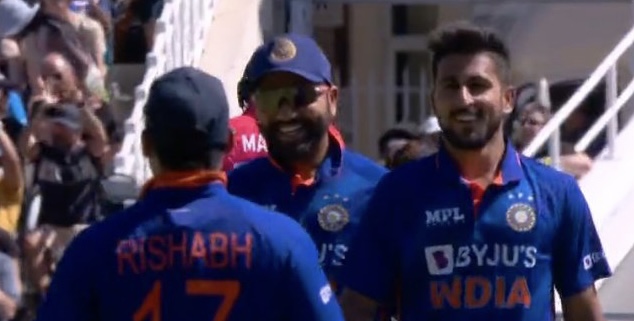 Rohit said whatever the youngster would do on field, they would stand beside him and give him that confidence.

“Yeah, pretty exciting. I mean, he showed us he’s got the skill set. It’s just about how he responds to that international pressure, which we want to see and very, very excited for him. Quite an exciting prospect, without a doubt. So we want to wish him the best and want just to stand beside him, whatever he does on the field, and give him that confidence,” Rohit Sharma said at the toss of third T20I against England.

India lost the toss and were asked to field first by Jos Buttler. Sharma said he would have done the same as he wanted to see how the team performs while chasing a score.

“We would have fielded first as well. Just a change that we wanted to bring. We batted in the first two games, so obviously we want to try out certain things and chasing was one of the things that we wanted to do and see how we go,” said Sharma.

India made four changes to the team for the third T20I and the skipper said that despite giving chances to fringe players, the team doesn’t want to lose momentum.

“Yeah, absolutely. That is something that we clearly spoke of. We don’t want to lose the momentum. We do understand the importance of winning games and the confidence just goes around. the group is quite crucial,” said Sharma.

Umran, playing his third international game, gave away 56 runs in his four overs while taking one wicket.