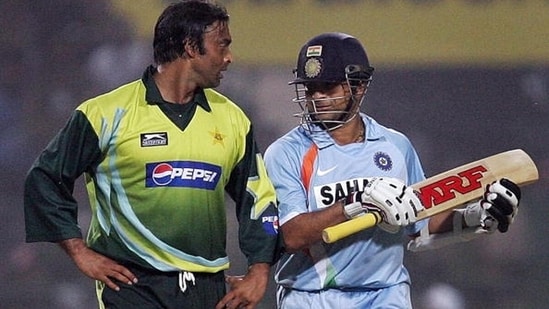 Srinagar, Febuary 16: Despite having retired long back, the stories involving intense duels between Sachin Tendulkar and Shoiab Akhtar are coming out in public every now and then.

In a latest one, former Pakistan pacer Shoaib Akhtar has revealed that former India great Sachin Tendulkar told him that his (Akhtar’s delivery broke his rib). Earlier in one of his anecdotes Sachin had himself spoken about this incident.

However in a recent chat during the Legends Cricket League, Akhtar sat down and recalled an incident related to the Tendulkar.

During Pakistan’s tour of India in 2007, during the seven-ODI series, Akhtar recalled how one of his pacey deliveries ended up hurting Tendulkar and broke his ribs. The extent of the damage was so much that Tendulkar had trouble breathing, revealed Tendulkar.

“It always feels good sharing stories. Like I and Sachin… Sachin is a very good cook. He once told me I want to cook something for you so you come over sometime. So I went to his million dollar home and we ate and we then shared stories. He told me ‘In Guwahati, one of your deliveries hit me and it broke my ribs’,” Akhtar said in a video shared by sports presenter Shonali Nagrani on her Instagram handle.

Sachin then said ‘I didn’t tell it to anybody. Sourav kept telling me… ‘Sachin keep at it. Do not move. But I couldn’t say anything because I could not breathe.’ He told me he spent the night in the hospital. When I asked him why he didn’t tell me, he said ‘if I were to tell you, wouldn’t I have received a few more lethal balls from you’,” added Akhtar.