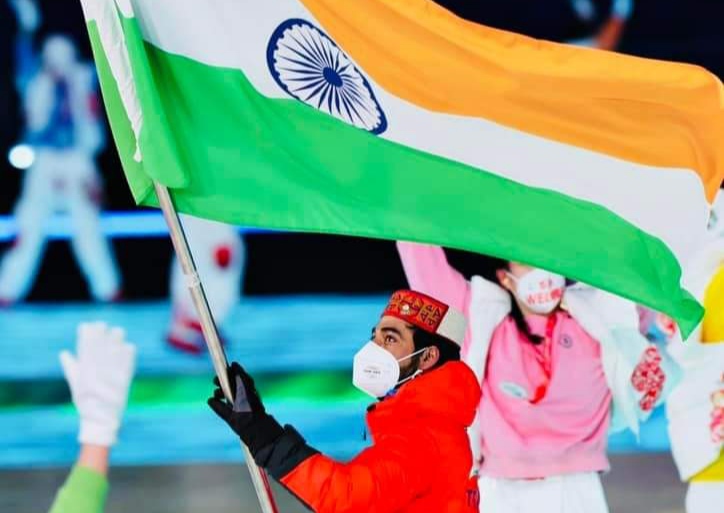 Srinagar, Febuary 4: Carrying the hopes and dreams of 1.25 billion people of India , the only athlete from Country in Winter Olympics 2022 , Arif Khan leads Indian contingent by holding tricolour in the opening ceremony held at Bird’s Nest National Stadium Beijing on Friday.

Soon after the ceremony , Arif took to his Fabebook pace and posted picture from opening ceremony holding the tricolour.

“Finally Olympics . Thank you all who supported me and believed in me.
Today India has received global attention as winter sports destination and I feel great being part of it. Thank you all and see you on the ski slopes in next days,” Arif Khan posted.

Held on the first day of Spring by the Chinese calendar, the event began with a performance by dancers waving glowing green stalks meant to convey the vitality of the season, followed by an explosion of white and green fireworks that spelt the word “Spring”.

After that, the Chinese flag was passed among 56 people representing China’s different ethnic groups before the flag was raised and the national anthem performed.

India has sent a six-member Indian delegation to the Winter Olympics where Jammu and Kashmir skier Arif Khan is the only athlete from the country to have qualified this time.
Arif will be competing in Slalom and Giant Slalom events during the Games to be held from February 4 to 20.