The 26-year-old Jamieson, who only made his Test debut against India in February 2020, secured the all-important wicket of Virat Kohli to prevent the skipper adding to his overnight score of 44.

He also dismissed the dangerous Rishabh Pant (4) before taking the wickets of Ishant Sharma and Jasprit Bumrah in successive balls as India slumped to 217 all out from 92.1 overs.

In reply, openers Tom Latham (30) and Devon Conway (54) put their side in the driving seat with a 70-run partnership before India hit back late on to leave the Black Caps on 101for two heading into day four.

A wet outfield had meant play was delayed by 30 minutes at the start of the day before India resumed on 146 for three, with captain Kohli looking ominous on 44 not out overnight.

But it took no time at all for Jamieson to send India’s talisman packing without adding another run, with the New Zealander trapping the skipper LBW with a perfect in-swinger.

Pant almost lost his wicket in a similar fashion, surviving a marginal LBW on the umpire’s call but Jamieson eventually got his man a few overs later – caught by Latham.

Ajinkya Rahane, India’s highest run-scorer in the WTC, helped steady the ship alongside Ravindra Jadeja but he was unable to add to his three centuries and six half-centuries.

Neil Wagner lured the 33-year-old right-hander into a speculative pull shot which went straight to Latham at forward square leg as Rahane was dismissed for 49 off 117 balls.

Suddenly 149/3 had become 182/6 and while Ravichandran Ashwin provided some stability, he fell victim to Tim Southee for 22 shortly after seeing India past the 200-mark.

Jadeja was given a lifeline on 11 when he was dropped by Southee at third slip after poking at Trent Boult, ensuring India were able to reach the lunchtime interval at 211 for seven.

And Jamieson returned to the fore in the afternoon session, taking the wickets of Sharma and Bumrah in successive balls to seal yet another five-wicket haul.

Sharma was attracted to a rising delivery outside off stump edging through to Ross Taylor at first slip, while a full, straight ball trapped Bumrah plumb LBW for a golden duck.

Jamieson was denied a hat-trick by Mohammed Shami, who anticipated the full-pitched delivery and drove the ball to the boundary with a flourish in response.

Yet just minutes later, following a long sight-screen adjustment break, Jadeja (15 from 53 balls) edged down the leg side to BJ Watling off Boult as India were bowled out for 217.

In reply, Latham and Conway made a cautious start as the Indian seamers looked for an early breakthrough, with Bumrah and Sharma both testing the openers with the swinging ball.

Shami managed to find the edge of Latham’s bat in the 20th over but to the despair of the Indian fans, the ball looped in the air and agonisingly over Jadeja in the gully.

Latham also poked and missed a ball from Bumrah in the final over before tea but New Zealand reached the break without losing a wicket, finishing the afternoon session on 36 for no loss.

Although India continued to threaten with the ball after tea, Conway and Latham remained resolute in overcast conditions as they reached the drinks break 70 without loss.

The partnership was ultimately ended upon the resumption of play, with Latham’s luck running out when he scooped an Ashwin delivery to Kohli at short extra-cover for 30.

But Conway, who scored a double century on his Test debut at the beginning of this month, showed no signs of buckling under the pressure as he reached his half-century from 137 balls.

Conway’s resistance was finally broken just before the close of play for bad light, whipping Sharma to Shami at mid-on, providing India with a late boost to their WTC title hopes.

Sangakkara, who was among 10 special inductees into the ICC Hall of Fame to celebrate the prestigious history of Test cricket, was presented with the framed cap at the Hampshire Bowl on live telecast during the tea interval on the third day of the ICC World Test Championship Final. 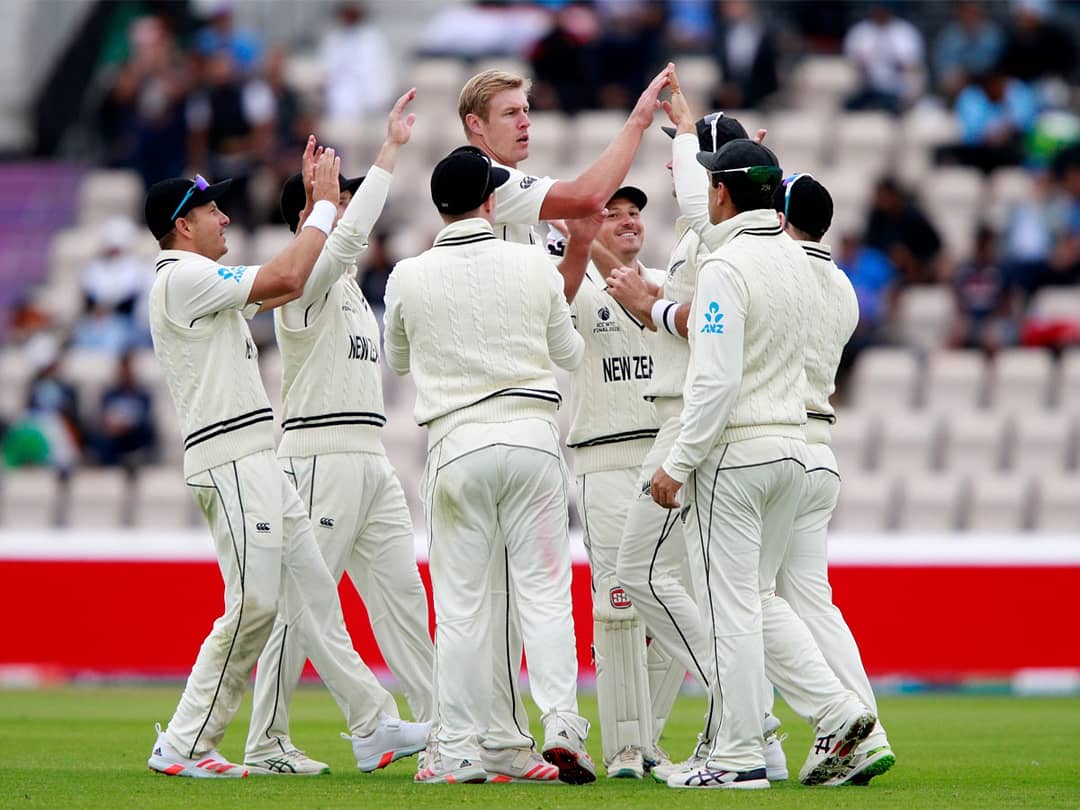