Tim Southee enjoyed a fine day with bat and ball to put New Zealand in a strong position heading into the reserve day of the ICC World Test Championship Final in Southampton.

The 32-year-old scored a quickfire 30 before removing both Indian openers in an absorbing final session, with India leading by 32.

Starting the day trailing by 116 runs, New Zealand began patiently, with Kane Williamson anchoring the innings, but three wickets before lunch opened the door for India.

However, cameos from Kyle Jamieson and Southee were enough to secure a 32-run first innings lead to sit in the driver’s seat in the push for a result.

Southee then removed Shubman Gill and Rohit Sharma with some clever inswing in tricky batting conditions.

New Zealand made a circumspect start to the day, with runs hard to come by after a delayed start.

It took more than four overs for the first runs off the bat, and just 16 were scored in the first hour of play.

That pressure eventually told, with Ross Taylor driving on the up off Mohammed Shami, caught by a diving Gill for 11.

Henry Nicholls followed soon after for seven, caught by Rohit Sharma off the bowling of Ishant Sharma before Shami cleaned up BJ Watling for one as New Zealand slipped to 135/5 at lunch.

If the first session belonged to India, New Zealand fought back in the second, playing with greater intent, with Colin de Grandhomme’s drive for four to kick off the session an indication of what would follow.

The all-rounder fell leg before to Shami for 13, but Jamieson came in and hammered 21 off just 16 deliveries, including one huge heave over long-on off Shami.

The Indian quick had his revenge the very next ball, as Jamieson hit a top-edge to Jasprit Bumrah at long leg.

All the while, Williamson was plugging away at the other end, eventually dismissed for 49 after 177 deliveries, caught by Virat Kohli as he was tempted to play a wide one by Ishant Sharma.

His strike rate of 27.7 is the lowest he has had in an innings where he has reached 20, an indication of just how hard he had to dig in, but while he missed out on a half-century, New Zealand had the lead by the time he departed.

At 221 for eight, the tail was given licence to have a go, and Southee took full advantage. He hit two sixes and a four in his 46-ball 30 putting on some valuable runs with Neil Wagner (0) and Trent Boult (5 not out) before he was the last man out, bowled off his pads by Ravindra Jadeja.

To challenge for the win, New Zealand needed some early wickets, and Gill fell for eight as Southee brought one back in to pin him leg before with the deficit still at eight.

Rohit Sharma and Cheteshwar Pujara knuckled down but another Southee inswinger did for the former, failing to play a shot as he went LBW for 30.

Pujara and Kohli saw out the remainder of the session and will return on Wednesday looking to build on India’s lead of 32. 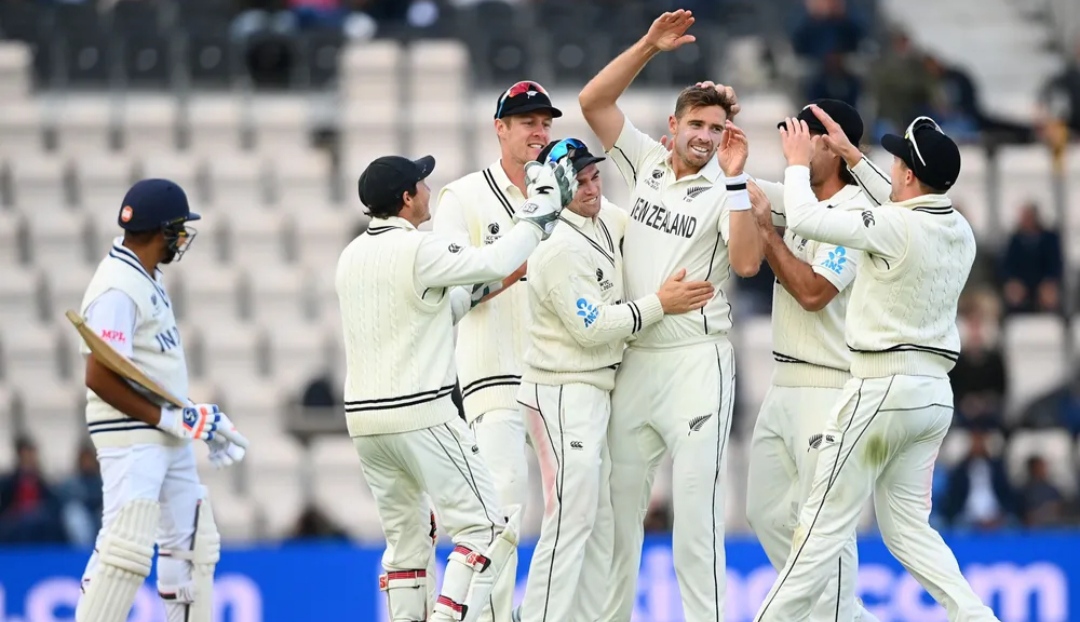