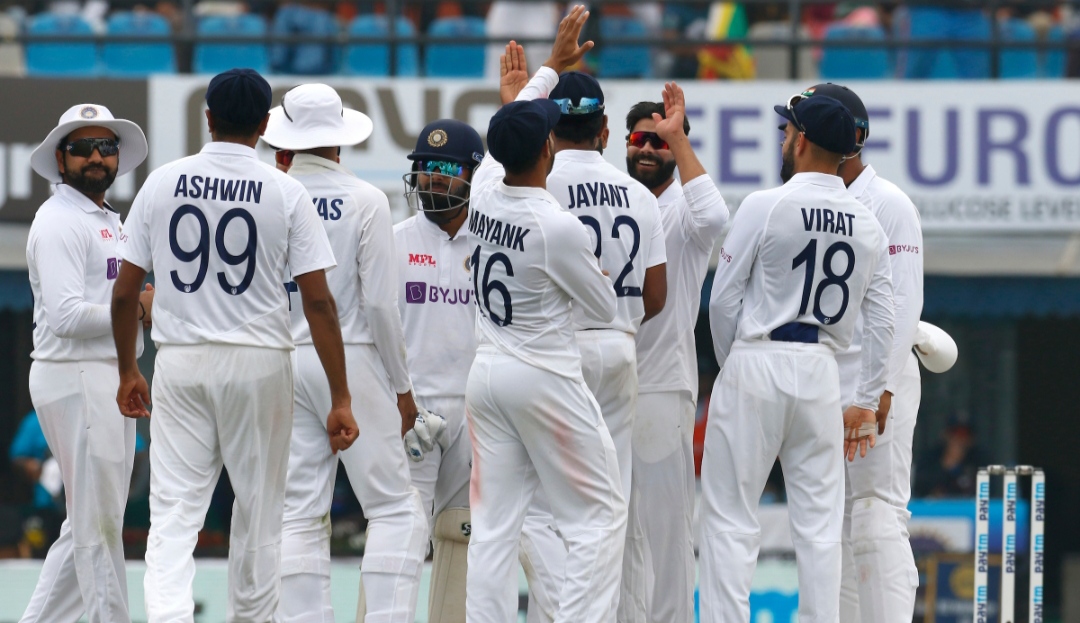 Mohali, March 6: All-round performance from Ravindra Jadeja (175 runs and 9 wickets) and R Ashwin (61 runs and 6 wickets) helped India register a resounding win in the first Test by an innings and 222 runs.

The victory gives India 12 crucial points in the ICC World Test Championship keeping them at No.5 in the table while Sri Lanka slip to No.3 with a loss. The hosts have also taken a 1-0 lead in the two-match series.

This match will be remembered for a lot of reasons – primarily being Virat Kohli’s 100th Test but while Kohli could get only 45 runs to his name, it was Jadeja and Ashwin, who shone with both bat and ball to hand India a commanding victory inside three days. They dominated on all three days, in all departments as Sri Lanka failed to get a session to themselves.

Surprisingly, this match will also be remembered for Kapil Dev – it was his records that were broken by both Jadeja and Ashwin. Jadeja, smashing 175*, the highest score by a No.7 batter in Tests (going past Kapil Dev’s record of 163) and Ashwin getting his 435th scalp to become India’s second-highest wicket-taker.

In the end, it was their combined effort that help the hosts secure a big victory.

Starting the day on 108/4 and still 466 runs behind, Sri Lanka had a huge ask ahead of them facing the Indian bowlers on day three. Pathum Nissanka (26) and Charith Asalanka (1) started cautiously with both batters getting reprieves in the first few overs. Rohit Sharma at short cover dropped a tough one off Ashwin, giving Asalanka a second chance. A couple of overs later, Shreyas Iyer was not able to hold on to a skier at mid-wicket, giving Nissanka a break. Gaining confidence, the duo started playing some fearless shots, trying to maintain a balance between upping the ante and saving their wickets.

Nissanka soon brought up a measured fifty, his fifth in Tests. Taking a leaf out of his partner’s book, Asalanka came into his own, smashing a few beautiful fours. Just as the partnership looked to settle down with the first hour coming to a close, Jasprit Bumrah struck. Asalanka, who misread the straightening ball, was trapped in front of middle stump and departed for 29. Sri Lanka had lost half their side, all to lbws.

The visitors slipped further as Ravindra Jadeja came into the attack. His 11th over, damaging the Lankans as both Niroshan Dickwella (2) and Suranga Lakmal (0) perished one after the other. Dickwella looked to sweep, top-edging it square leg where Iyer made no mistake this time. Lakmal tried going big on a flighted delivery as the ball took half of his bat, offering Ashwin a simple catch at mid-off.

At seven down and struggling, Nissanka was the only batter providing any resistance but India continued picking on his partners as he was left stranded at the other end. Lasith Embuldeniya (0) fell to Shami and Jadeja came back to dismissed Vishwa Fernando (0) and Lahiru Kumara (0) on back-to-back deliveries as the visitors folded on 174, 400 runs behind. Nissanka remained unbeaten on 61, while Jadeja finished with a five-wicket haul.

As expected, India enforced the follow-on leaving Sri Lanka to negotiate four overs before Lunch. They were pegged back further, with Ashwin giving India the first breakthrough as Lahiru Thirimanne was dismissed for a duck. Ashwin struck again after break, this time getting the danger man Nissanka (6), also equalling Kapil Dev’s record of 434 Test wickets. Karunaratne added a few handy runs but he fell victim to Shami, edging one to Pant as the Lankans slipped to 45/3.

Dhananjaya de Silva and Angelo Mathews steadied the ship thereafter and almost got to a fifty-run stand but Jadeja had other plans. Their comfortable partnership was broken as the spinner got his sixth wicket in the match to send back De Silva for 30. The next man Asalanka came in with aggressive intent. In the over before Tea, he smashed Jadeja for 20 runs (6,6,0,0,4,4) to take Sri Lanka to 120/4.

The Lankan’s onslaught did not last for long as Ashwin snapped him on the third ball after Tea to get his 435th scalp, going past Kapil Dev to become India’s second-highest wicket-taker in Tests. Jadeja, not wanting to be left behind, removed Mathews (28) and Lakmal (0) in one over to take his wicket tally in the match to 8. Dickwella and Embuldeniya added 32 runs for the eighth wicket before Embuldeniya became Jadeja’s next victim – getting an outside edge to the keeper as he looked to defend.

India lost a couple of reviews against Dickwella, who resisted against all odds and even got a fifty. But with a massive target in sight and India bowlers closing in, the Lankans were finally bowled out for 178, scoring just four more runs than their first-innings total. Between the two Jadeja and Ashwin took 15 of the 20 Lankan wickets that fell.