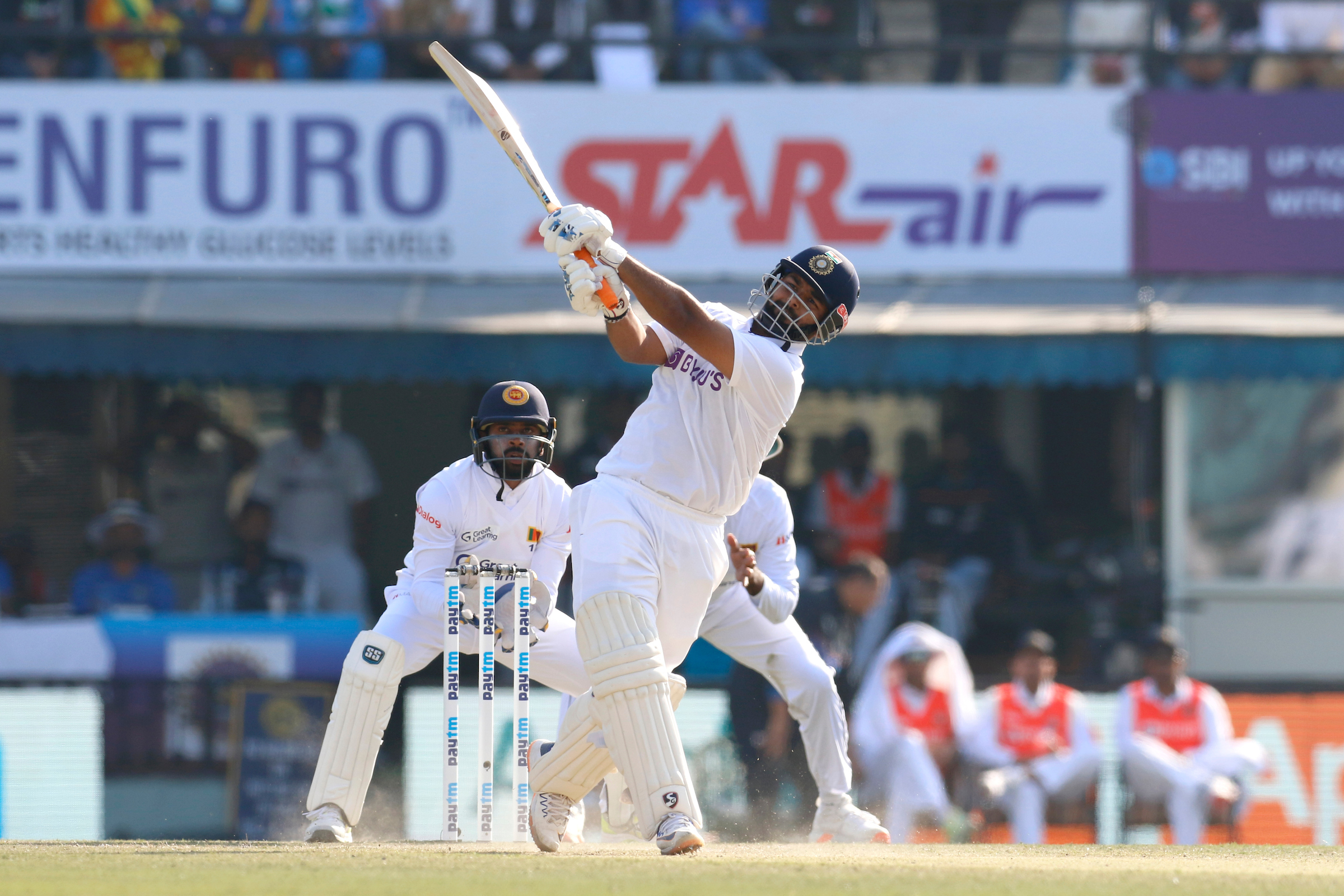 Mohali, March 5: Rishabh Pant scored a sizzling 96 off 97 deliveries as India ended day one of the Mohali Test against Sri Lanka on 357/6.

Calling it right at the toss, Rohit Sharma in his first Test as India captain decided to bat first. The two teams had very different readings of the pitch as the hosts went with two seamers and three spinners in their playing XI, while Sri Lanka opted to field only one specialist spinner.

It was a brilliant start for India as Mayank Agarwal and Rohit Sharma were severe against the pace of Suranga Lakmal and Vishwa Fernando. There was a hint of movement but nothing much to trouble the two openers. India raced to 52 in 9.4 overs before Sri Lanka finally struck.

The pace of Lahiru Kumara did the trick as he set up Rohit perfectly with a short delivery and the batter simply could not resist the pull. The India skipper walked back for a quick-fire 28-ball 29.

Agarwal along with Hanuma Vihari would then go on to add 28 more runs before the former was trapped by a brilliant delivery from Lasith Embuldeniya. The left-arm spinner flighted the ball in the air and got to straighten it just enough to get the Indian opener for 33.

India are 109/2 at Lunch on Day 1 after losing their openers.

Virat Kohli, who playing his 100th Test, kept the scorecard ticking along with Vihari and saw India through to lunch on 109/2.

The pair would continue to gain momentum as the Sri Lankan bowlers looked largely ineffective after the break. But Embuldeniya, the stand out bowler so far would strike again, bowling out Kohli for 45. The disappointment for the former Indian skipper continued as did the search for an elusive 71st ton.

Vihari would soon follow suit as he too was bowled by Vishwa Fernando after a well-made half-century. His knock of 58, batting at No.3 would have undoubtedly helped his cause of cementing a place in the batting order. But India suddenly found themselves at 175/4, with a need to rebuild in the afternoon and evening sessions.

They headed to Tea at 199/4, with Rishabh Pant and Shreyas Iyer at the crease.

Iyer though could not last long in the final session of the day, walking back for 28 as Dhanajaya de Silva trapped him in front of the stumps with a brilliant delivery.

Sri Lanka now sensed that they were back in the contest but Pant would soon unleash carnage to dash all their hopes. He was brilliantly supported by Ravindra Jadeja from the other end.

The wicketkeeper-batter would first bring up his fifty and then up the tempo at a rate of knots. There were some stunning shots hit by Pant, especially coming down the track against the spinners. He smashed nine fours and four sixes, nearing his century. The partnership with Jadeja also crossed the 100-run mark.

But taking the new ball did the trick for Sri Lanka. Just four runs away from another scintillating century, Pant was bowled by Lakmal as the disappointment was clearly etched on his face. It was a casual shot, which left a gap between bat and pad and the ball crashed onto his off-stump. Nonetheless, his 97-ball knock had downed the morale of the Lankan bowlers.

Jadeja held steady on 45* and Ravichandran Ashwin also got his eye in on 10*, as India went to stumps on day one at 357/6. The pair will now target taking the Indian score past the 400-run mark while Sri Lanka will gun for early wickets on day two in Mohali.