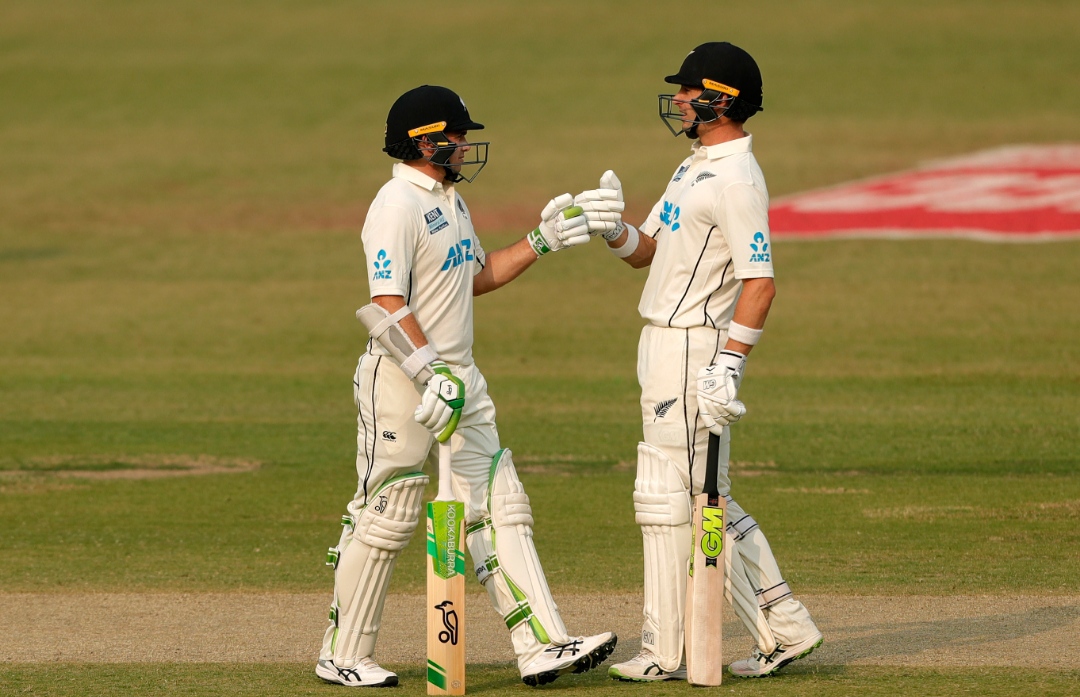 Kanpur, November 26: New Zealand enjoyed an excellent day of cricket in Kanpur – first bowling India out for 345 and then ending on 129/0 after an unerring opening stand between Will Young and Tom Latham.

Starting the day at 258/4, India looked to continue in the same vein with Shreyas Iyer in sublime form. He adopted the aggressive approach from the get-go, playing a couple of cracking shots against Kyle Jamieson to start the day off.

Tim Southee from the other end though would embark on a devastating spell of swing bowling in the morning session. He first knocked over Ravindra Jadeja who failed to add a single run to his overnight score of 50, chopping one onto the stumps. A beautiful out-swinger would then bring about the wicket of Wriddhiman Saha for 1.

Shreyas Iyer was on a hurry to mark his debut Test with a century, exclusively dealing in boundaries. He was joined by Ravichandran Ashwin on the crease, as he too started to play his shots from the very off. Iyer would finally reach the milestone, raising his helmet as India had its first debutant centurion since 2018.

Iyer though would perish soon after, playing a loose shot against Tim Southee immediately after the drinks break. Attempting to play a booming drive against a wide delivery from Southee, he walked back to the pavilion after a knock of 105. Southee’s terrific performance in the morning would continue on as he set up Axar Patel beautifully to induce an edge and dismiss him for 1 while notching up his third five-for against India.

Umesh Yadav and Ravichandran Ashwin would see-through the rest of the session as India headed to lunch with eight wickets down.

It didn’t take long for the visitors to wrap things up in the afternoon session, as Ajaz Patel delivered two back-to-back strikes to get the wickets of Ashwin (38) and Ishant Sharma (0).

The New Zealand openers would begin cautiously seeing through the opening spells of Ishant Sharma and Umesh Yadav. Any delivery outside the off-stump was left by Tom Latham and Will Young, with the clear strategy of not allowing the Indian bowlers to get on top.

Spin was soon introduced into the attack by Indian skipper Ajinkya Rahane but though Ashwin and Jadeja kept things tight, they could not get through the sturdy defence of the openers. Young would eventually up the ante, nearing his half-century as New Zealand headed to tea at 72/0.

Continuing to bat sensibly, New Zealand again showcased what a tough nut they are to crack in any condition. Will Young brought up only his second half-century in Test cricket, proving to be an excellent replacement for the injured Devon Conway. He was the aggressor in the partnership, while Latham continued to grind the bowlers down.

The Indian spinners were getting much more perches out of the wicket but the slow nature of pitch meant that the batters had ample time to counter any vicious turn. With the end of the session approaching, Latham brought up his 21st half-century in a knock full of substance.

With the light fading, the two openers had to counter some nervy moments but they got through it unscathed, ending the day on 129/0.

While the visitors will hope to continue building upon this momentum, India will hope for some quick wickets to turn the tide in their favour on day three.